American artist Trenton Doyle Hancock has been influenced equally by the history of painting as well as by the pulp imagery of pop-culture through comics, graphic novels, cartoons, music and film.

Hancock transforms traditionally formal decisions—such as the use of color, language and pattern—into opportunities to build narrative, develop sub-plots and convey symbolic meaning. Storytelling is a central part of Hancock’s artistic practice and for almost two decades he has developed an epic narrative surrounding the “Mounds” and a cast of colorful—and often not so colorful—characters who populate a wildly fantastic, invented landscape. He will be discussing his studio practice and work within the context of this ongoing saga of the Mounds and the world he has created.

The atrium at Virginia Commonwealth University in Qatar 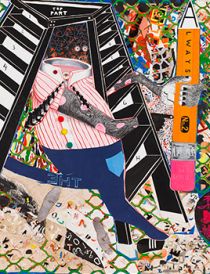