The master printmaker, internationally known for his complex engravings, will give his Crossing Boundaries Lecture titled, "Floating Graphics."

“Make artworks that float on air

Keep them light and strong

then they will have their own spirit when they fly.”

Japan-born artist Koichi Yamamoto will give two lectures about his printmaking work, and particularly on merging traditional and contemporary approaches to printmaking, and creating innovative perspectives on the language of printmaking. It is his exploration and mastery of the complex process of engraving that raises his work to an extraordinary level in printmaking.

For his talk at VCUarts Qatar, Yamamoto will share his ideas and motivations, but also how locations and situations have influenced his work. Looking back on his 30 years of print works, he will summarize the evolution of formats, methods and learning processes. The internationally known master printmaker will also talk about his recent focus on functional forms and intaglio printed kite art at Qatar National Library.

The master printmaker, internationally known for his complex engravings, will also talk about his recent focus on functional forms and intaglio printed kite art at Qatar National Library. Making kites is a transcendent and romantic activity for him. From the static graphic work production in the print studio, to the dynamic flight of kites under the sky, all these experiences are beyond art appreciation.

Koichi Yamamoto is an artist who merges traditional and contemporary techniques to develop unique and innovative approaches to the language of printmaking. His prints explore issues of the sublime, memory, and atmosphere. Koichi has worked at many scales, from small and meticulously engraved copper plates to large monotypes.

Image: Courtesy of the Fanoon Center For Printmedia Research. Print by Koichi Yamamoto.

The Atrium at VCUarts Qatar and Qatar National Library 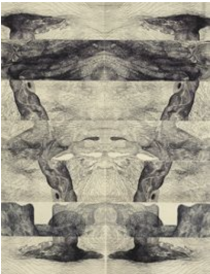