This lecture, the latest in his series of Abu Hamdan's live audio essays examines the contemporary politics of listening, and the importance of the earwitness. His multifaceted work takes a critical look at politics, specifically how it relates to sound, and the implications of today’s pervasive culture of surveillance and listening and recording technologies. One of the main focuses of this “hearing” is Abu Hamdan’s collaboration with Amnesty International and Forensic Architecture (an independent research agency based at the University of London) on an acoustic investigation into the prison of Saydnaya, which is located 25 km north of Damascus.

In Birdwatching, Abu Hamdan brings the audience through the earwitness testimony of survivors from Sayndaya prison near Damascus who were blindfolded or kept in total darkness for extremely long periods and who developed an acute sensitivity to sound. The prison is inaccessible to independent observers and monitors. The memories of those who survived it are the only resource available from which to learn of, and document, the violations still taking place there. However, the capacity of detainees to see anything in Saydnaya was highly restricted as they were mostly kept in darkness, blindfolded, or made to cover their eyes. As a result, the prisoners developed an acute sensitivity to sound. Through new and dedicated techniques of earwitness interviews created by Abu Hamdan, the witnesses reconstructed the architecture and events of the prison they experienced through sound.

Described in a Bloomberg News article headlined as, “The Art World Star You’ve Never Heard Of”, his works are amongst the collections at the MoMA and the Guggenheim in New York, the Van AbbeMuseum in Eindhoven, Centre Pompidou in Paris, and the Tate Modern in London.

Lawrence Abu Hamdan’s interest with sound and its intersection with politics originate from his background as a touring musician and facilitator of DIY music. His audio investigations have been used as evidence at the UK’s Asylum and Immigration Tribunal and as advocacy for organizations such as Amnesty International and Defence for Children International. His forensic audio investigations were conducted as part of his research for Forensic Architecture at Goldsmiths College London where he received his PhD in 2017. Abu Hamdan is the author of the artist book [inaudible] : A politics of listening in 4 acts.

Abu Hamdan was the recipient of the 2018 Abraaj Group Art Prize and the winner of Art Basel’s 2018 Baloise Art Prize in the “Statements” sector. His film Rubber Coated Steel (2016) won the Tiger short film award at the Rotterdam International Film festival 2017 and his exhibition Earshot at Portikus Frankfurt (2016) won him the 2016 Nam June Paik Award for new media. Abu Hamdan was a 2017/2018 guest of the DAAD Kunstler Program in Berlin and the 2015-17 fellow at the Vera List Centre for Art and Politics at the New School in New York. He has had solo exhibitions at locations including Hammer Museum L.A (2018), Portikus Frankfurt (2016), Kunsthalle St Gallen (2015), Beirut in Cairo (2013), The Showroom, London (2012), and Casco, Utrecht (2012). His works are part of collections at the Museum of Modern Art (MoMA) and the Guggenheim in New York, the Van AbbeMuseum in Eindhoven, Centre Pompidou in Paris, and the Tate Modern in London. 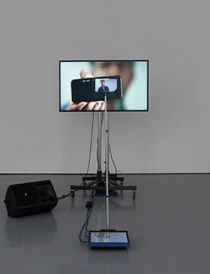