In 2012 Arsanios was awarded the special prize of the Pinchuk Future Generation Art Prize. She was nominated for the Han Nefkens Foundation award in 2014 and more recently the Paulo Cunha e Silva art prize. Marwa Arsanios is also the co-founder of 98weeks.

In her lecture at VCUarts Qatar, she will talk about the subject of reading, performing text and language as a way to deal with politics. Thinking through reading as a communal activity rather than something that would be done individually, in the silence of the public library or the privacy of the domestic space. This talk will also tackle the curated reading room revolving mainly around eco-feminist and finance themes.

In her lecture at Fire Station Cinema, she will talk about how the broad frame of investigation in which her practice operates, would be the different aspects of the relation between the cultural realm, politics and violence. And by the cultural realm she means its politics, economies and social manifestations. She has been looking, through different material objects, at the way violence affects culture and the way it gets affected by it and reproduces it. 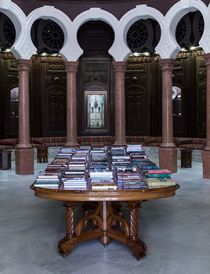