Egypt Here and There: The Images and Architectures of National Exhibitions and Pavilions, 1926-1964

The site in central Cairo where today’s Opera House and Museum of Modern Art are located was once the country’s focal point for exhibiting national modernity. The history of the site captures a pivotal process in Egypt’s modernization: the ways in which Egyptian strategies of self-representation developed over time. In 1898 British colonial authorities held the first agricultural exhibition on the southern part of the uninhabited Gezira Island.

Following the 1919 Revolution, the site was transformed into a stage for the Egyptian government, along with financial institutions and powerful industrialists, to showcase national production in a variety of fields such as agricultural products, as well as industrial goods such as textiles. Over a period of half a century the exhibition site was altered numerous times with permanent and temporary buildings and exhibition halls. This domestic development was paralleled with Egypt’s presence in international exhibitions such as the 1939 and 1964 World’s Fairs.

In Egypt and abroad the architectures of national exhibitions and pavilions, as well as their circulated images, were powerful tools for communicating Egypt’s modernity and progress to national and international audiences. In this lecture Mohamed Elshahed examines several examples of Egyptian exhibition architecture between 1926 and 1964, a period framed by the rise and fall of state-led nationalist representations of Egypt. 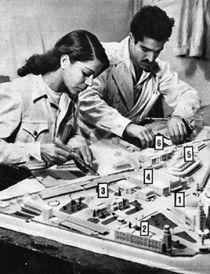