Creating contradictory sensations through the usage of opposing ideas, forms and fabrics has always been Dice Kayek's modus operandi. Their approach to fashion is shaped by their research of impossible unions, and to find minimal, yet meaningful ways to combine the unexpected. "Istanbul Contrast", inspired by and dedicated to Sublime Porte's harmonious contradictions, is the culmination of this research. In 2013, Dice Kayek won the Jameel Prize 3, an international award for contemporary art and design inspired by Islamic traditions, for its Istanbul Contrast exhibition, which was hosted by the Victoria & Albert Museum. The result of such prestigious praise led to the launch of fully-fledged couture collections including Woven Tales, Nocturne 54, Dollhouse and Winter Garden.

After almost two decades since Ayse and Ece Ege founded Dice Kayek, they felt the urge to go beyond the temporality of fashion and look deeper into their primal source of fascination: Istanbul, an indefinable city belonging neither to the West nor to the East, blending the wisdow of traditions and a flair for modernity. Characterized by its magically coexisting contrasts, they were wondering how they could translate Istanbul's rich architectural, cultural and religious diversity into couture.

Dice Kayek was launched in 1992 by sisters Ece and Ayse Ege and over the past two decades has built a reputation for its carefully curated universe, one in which tradition combines with modernity, film, art and personal memories to inform its designs which are inspired by using architectural lines to build strong, structural silhouettes. A modern take on couture, creativity, detail and craftsmanship underpins the Turkish heritage brand, which is based in Paris and became part of the Federation Francaise de la Couture in 1994. Since then, the brand has received industry-wide recognition, becoming the recipient of numerous accolades and awards and the subject of various cultural and fashion exhibitions. 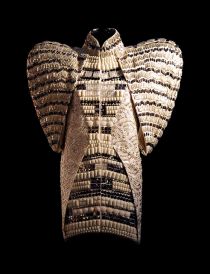