VCUQatar presents a lecture at Katara Cultural Village by Dr Sohair Wastawy on the reasons for and value of cultural preservation and the role of technology as an enabler in the process.

Hosted by Al-Gannas Association, Al-Tashar Hall in the The Cultural Village (Katara)

The cultural heritage of a nation represents its collective identity – national, regional and local. Our heritage is also the bedrock upon which our countries rely to maintain stability, identity, and, increasingly, sustainable economic livelihood.

For a nation to instill pride, inspire civic responsibility, and strengthen social cohesion it must celebrate and preserve its cultural heritage. In the face of globalization, transition economies, natural disasters, wars, and conflicts many of our cultural artifacts and traditions are threatened by loss or destruction.

There are numerous ways to preserve our heritage. The speaker will share some of the methods of achieving global integration while simultaneously preserving cultural heritage. Projects presented will cross a diverse range of topics such as virtual museums, virtual history projects, reconstructing ancient civilizations and personalizing content delivery for assisted navigation of information rich physical environments. The majority of projects presented deal with Arab and Islamic heritage and the efforts of many institutions to pay homage to this rich and fascinating history.

Sohair Wastawy received her BA, MA, and completed work towards her Ph.D. thesis in Linguistics at Cairo University, Egypt. She possesses a Master’s degree in Library and Information Science from The Catholic University of America, Washington DC, USA and a Doctorate degree in Library and Information Management from Simmons College, Massachusetts, USA.

Dr. Wastawy has been a practitioner in the information field since 1975 and practiced librarianship in a number of countries that include Egypt, Saudi Arabia, and the USA. She began her library career at Cairo University Library, taught librarianship in the first women’s library program in Saudi Arabia and was the Dean of Libraries at Illinois Institute of Technology in Chicago from 1988 until 2004. Dr. Wastawy was appointed in July 2004 as the first Chief Librarian for the new Library of Alexandria, Alexandria, Egypt and as the Dean of the University Libraries at Illinois State University in June 2010.

In addition to her leadership role and managerial responsibilities, Dr. Wastawy is often a consultant to non-for-profit organizations, corporations, and accreditation commissions. Dr. Wastawy has been the recipient of many awards, a Peace Fellowship and a Fulbright Scholarship and has written and spoken extensively on library and information future and management issues.

Al-Tashar Hall in the The Cultural Village (Katara) 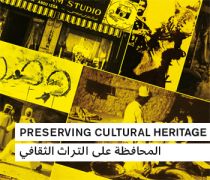