"QAL, The anti-carpet", is an interactive, generative, audiovisual installation exploring environmental design in futuristic architecture with roots in Persian motifs.

The initial idea of this project was to make a connection between ancient Persian art icons and link them to a new design objective in the form of an installation. The key elements were Persian carpets and Persian gardens which were inspired by the idea of an earthly paradise. It proliferated spread through Persian literature from the time of the Achaemenid Dynasty. Such gardens would have been enclosed. The garden's purpose was to provide a protected place to relax and for spiritual, and leisure purposes.

Persian carpets were made for a wide variety of utilitarian and symbolic purposes. They were produced in Iran and the surrounding areas which once belonged to the Persian Empire and were used at home, sold locally, and exported to other parts of the region and further abroad. The tradition and style of Persian gardens has influenced the design of gardens from Andalusia to India and beyond. In contrast with traditional carpets, QAL is not a single pattern. It is mortal. It dies in one second. QAL’s patterns are created in real time by hands moving through the light.The carpet is created by an accumulation of patterns on a transparent vertical screen. The laptop’s screen projects white light towards the hands of the viewer which starts to generate patterns made by its movements. The result is a new, highly detailed, physical carpet in very high resolution. Over 60 patterns can be generated in one second. Some of them have been captured and are printed on canvases within the exhibition. Because of the countless possibilities of different parameters, such as the amount of light in the gallery, the sizes and the positions of hands and skin colors, the patterns are unique and it is almost impossible to recreate the same one. Some of these patterns was part of the LAND, Ali Phi’s solo show.

The Art Trail Tour offered by Qatar Foundation is scheduled on Thursday, March 14 at 12:30pm in presence of the artist.

A performance-driven audiovisual project started in 2010 will be presented on March 14 at 6pm at VCUarts Qatar Atrium. It is concentrated on Persian motifs, the forgotten essence of Iran as an inspirational region and the middle-eastern philosophy. It is an electronic reproduction and sampling of ritual and regional music of Iran, and its rhythms and patterns are the main material of this project in both formats of sound and visual.

Ali Phi is media artist and interaction designer. His works explore connections between programming, generative audio-visual design, interactive media and immersive environment installations. His explorations in media arts started with the project Elemaun in 2008 as an audio-visual performance.

Ali Phi’s works depict the relationship between point, line, plane, light and darkness. The digital process and flexibility in his works are an interrelation and a diverse and growing alteration between today's media and capacities of presentation. The flow of his works is to establish a relationship between video presentations, programming and converting sounds into images, and vice versa. It aims to shift the process of showing movement into images and to interconnect all those elements and how they have been transformed by computer.

He is the founder of Nullsight, a media lab and art collective in Tehran and freelance festival curator of TADAEX– Tehran Annual Digital Art Exhibition. Ali Phi has performed and exhibited his works at international festivals including Ars Electronica, Mutek AE, and Patchlab, and had several media art installations in public spaces such as an exhibition for Monson Group and project SHYM in an under-construction building.

The opening of the exhibition will take place in the presence of the artist.

Opening hours: Saturday to Thursday - From 9am to 5pm / Friday - Closed

Special thanks to Mohsen Gallery, Iran.

Image courtesy of the artist.

The Gallery at VCUarts Qatar 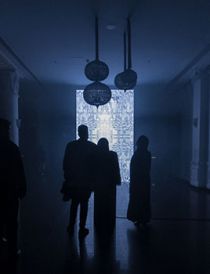