Tarek Atoui will be giving the latest talk in the Wavelength lecture series on March 30 at 7pm Doha time.

Composer and artist Tarek Atoui will be giving the latest talk in the Wavelength lecture series.

It will take place on March 30 at 7pm Doha time.

Ocula magazine recently described the Paris-based sound artist and composer’s oeuvre as sitting “at the cusp of redefining the language of visual and performing arts and challenging contemporary sound production.”

Atoui comprehensively exploits the potential of sound art, which lies at the heart of his practice. He is not only interested in how audio events or sounds develop an acoustic effect. Equally important to him is how these phenomena can be perceived with sensory organs other than the ear, how they act as a catalyst for human interaction, and how they relate to social, historical, or spatial parameters. The point of departure for his works is usually extensive anthropological, ethnological, musicological, or technical research, which results in the realization of instruments, listening rooms, performances, or workshops.

Wavelength is an online lecture series that is a collaboration between VCUarts, the ICA, and VCUarts Qatar. A dynamic group of artists, designers, curators and scholars have been invited to share their work with the VCU communities in Richmond and Doha as well as the general public throughout the 2020–21 academic year. 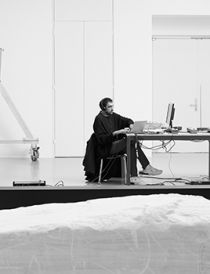