The Spanish cultural tradition has long disproportionately tilted towards the visual arts. Velázquez, Goya and Picasso, the powerful painterly triad, for example, are barely balanced in heft by the groundbreaking literary modernity of Cervantes. In Spain, even great works in non-visual mediums are primarily known for the iconic figures they have produced: think Don Quixote or Don Juan. Indeed, the visual defines Spanish Art, in all its forms both historically, and today.

In the new digital environment, everything is images, everything is visual. The emergence of new mediums is fertile ground for creators working in this nascent visual tradition. Young, bright, playful and daring, the work of these artists is simultaneously commercial and profoundly personal. Their world is both virtual and tactile; it is the world we live in now. Who would dare today that what they do is not pure, old fashioned Art?

Now, for the first time the association between Spain’s Arts & Culture and Héctor Ayuso allows an in depth look at an all new generation of Spanish visual creators.

"The only thing you really have is what you give away"

Héctor Ayuso’s egalitarian vision and his out-of-the-box approach to art, technology and collaboration has seen him inhabit a unique space at the spaghetti junction of the current creative sphere. His world is post-discipline and melds craft and hand-based skills with a digitally informed consciousness.

In 2000, Ayuso founded the OFFF festival which has become one of the most vital and visionary spaces to discover and understand cross-media activity. OFFF extends its reach beyond its home in Barcelona through an international program which sees 'OFFF On Tour' visit up to five countries a year and reach an audience of up to 20,000 creative professionals and students.

More than just a looking glass on the creative world the festival actively seeks to engage with that world by fostering collaborations, research and education. Collaborations have led to international recognition, such as the winning in 2011 of a Cannes Lion for the festival title sequence. In 2008, Ayuso founded the Atelier, a unique educational platform to stimulate and promote the development of new generations of creative professionals.

Ayuso’s approach is founded in over 20 years’ experience in the creative industries and education. He has directed various films, shorts and documentaries and worked as a designer in the fields of visual art, design and interactive. Ayuso currently involves himself in projects as an artist, filmmaker, creative director, storyteller, seeker and curator and describes himself as an 'experience maker'. He lives in Barcelona with wife Aimée Duchamp; their two dogs Jónsi & Lilus and his more than 5,000 strong DVD/Blu-ray collection. He is a long distance runner and aspires to one day become an Ironman finisher. 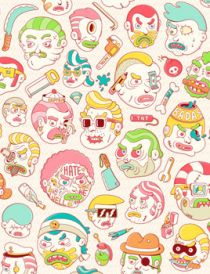