This reception is open to the public and no reservations are required.

As an international center for culture and commerce, New York City has been a destination for art since the early twentieth-century. Accordingly, it has fostered some of the most influential art movements of modern times; has been home to a number of high-profile artists; and has witnessed the establishment of a number of prominent art institutions.

With its countless pockets of immigrant communities, the metropolis also boasts a diverse population of residents, one that is in constant communication with the rest of world. As headquarters to the US’s top financial institutions, the draw of money, power and politics is often in play, defining how much of the country operates while having a significant stake in its foreign policy.

These myriad facets are translated into an everyday reality that reflects the dynamic nature of the city—an energy that manifests in a push and pull of urban life that is at once exhilarating and bewildering. Inclusive, yet alienating, with its crowded streets and lonely residents; cutting-edge yet backward, where mind-boggling wealth is only feet away from abject poverty, New York exists as a long list of contradictions—oppositions that are in never-ending dialogue.

It is within this framework that a number of Arab artists have lived and worked for years. Varied in age, background and immigrant experience, these artists work in a range of medium and artistic practices. What unifies them, however, is their continued connection to the Arab world despite living abroad, be it in return trips to the region or references in their art. Equally compelling are the commonalities we might find when examining their work within the milieu of New York as a sociopolitical/cultural entity.

Although at first glance many of the artists featured in “New York Chronicles” might only seem to share a common heritage, over the course of their careers they have possessed an even greater link: their responses to (or interactions with) New York City. As this small, often fragmented, group of artists has navigated the local art scene, how has living and working in New York impacted their artistic practices? What about the city has become subject matter? And what has attracted or repelled these artists? What concerns or fixations does New York inspire? And what about the metropolis as a cultural hub and political epicenter can we determine from their work?

These are the questions that form the basis for “New York Chronicles” which brings together a number of established and emerging Arab artists whose works represent a broad spectrum of the New York experience. As curators who have been involved in the New York art scene in various capacities, we seek to explore these questions through the works of artists employing a range of media—including painting, photography, installation and video. Spanning generations and several periods of art, “New York Chronicles” reveals the profound nature of how an environment can impact the creation of art and how a multitude of artistic, cultural, economic and political variables can shape visual culture. With many of the proposed artists actively exhibiting in the Arab world and within the context of the Virginia Commonwealth University in Qatar Gallery, what can their work (although made in New York) reveal about the Arab art world and the relevance (or irrelevance) of geographic borders?

Osama Abusitta, an engineer by education and profession, is a collector of contemporary Arab art. During the 1990’s, while living and working in New York, he was active in the Arab art scene. In the early 1990’s he assisted in organizing a major exhibition of Arab women artists entitled “Forces of Change” that was inaugurated at the Museum for Women in the Arts in Washington DC. He curated and organized an exhibition for Samia Halaby at Skoto Gallery in New York (reviewed in Art in America, Jonathan Goodman, Dec 2000 and MIT Journal of Middle East Studies, by Inea Bushnaq, May 2001) and curated an exhibition of the works of Athir Shayota and Emna Zghal at Boniface Chapel at the Cathedral of St. John the Devine in 2003 entitled ‘Contemporary Art from the Ancient World” (reviewed in New York Times, Feb 14 2003). In 2008, part of his collection was exhibited at VCU at “Faces and Letters: Through the Eyes of Collectors in Doha”. He lives and works in Doha.

Maymanah Farhat specializes in modern and contemporary Arab art. She received a bachelor’s degree in the History of Art and Visual Culture (magna cum laude) with an emphasis in non-Western visual culture from the University of California Santa Cruz. In addition to conducting extensive research in Egypt, Jordan, Syria and Lebanon, she has focused on the arts of Oceania, Africa and the Americas. In 2003 she completed an undergraduate thesis on the 19th century figurative paintings of Maori meeting houses, while in 2005 she helped organize the exhibition “Cloth and Culture in Oceania” at UCSC and assisted with a field study of 19th century Hawaiian (inter)nationalism in Honolulu, Hawaii.

From 2005 to 2007 Farhat was the editor of ArteNews, a leading English-language online magazine focusing on art and culture of the Middle East and North Africa. In 2005 she began working on ArtAsiaPacific magazine’s annual Almanac, a groundbreaking periodical that looks at the art scenes of 67 Asian nations, including 13 in the Arab world. She was the West Asia editor of the Almanac and a frequent contributor to the magazine’s bimonthly publication from 2006 to 2009. Other published works include art historical writings, exhibitions reviews, artist profiles, film reviews, and political essays. She has lectured on the Middle East in universities, galleries and non-profit organizations throughout the United States and has curated several exhibitions, including “Three Arab Painters in New York,” held at The Bridge gallery in Manhattan’s Chelsea district in 2006.

Recent projects include commissions from Arab publications such as the Electronic Intifada, Canvas Magazine and Contemporary Practices and a number of catalog essays for exhibitions featuring some of the Arab world’s leading artists, including new media artist Zena el Khalil and painters Samia Halaby, Assad Arabi and Safwan Dahoul. 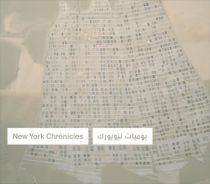