Works by Alumni and Faculty at Infinite Dimensions

The latest edition of the Doha Fire Station Artist in Residence exhibition, titled "Infinite Dimensions", took place at the Garage Gallery from July 16 to September 1, and it included works by alumni and faculty from VCUarts Qatar.

Presented in three main sections - Tangible Spectrums, The Edge of Thoughts, and Visual Sphere - the exhibition gave visitors the opportunity to discover and explore more about local contemporary and conceptual art, through the display of wide range of unusual artworks, art practices and mediums.

Curated by Dr. Bahaa Abudaya and Saida Al Khulaifi, the end of year exhibition explored the question of conceptualism in artistic practice. The 18 artists, 14 of whom were VCUarts Qatar alumni and faculty, were invited to explore and experiment with new ideas and media to gain a better understanding of the meaning behind conceptual artworks, focusing on ideas and their context, rather than their aesthetics.

In the Visual Sphere section for example, themes of popular culture, local landscapes, outer space and fantasy creatures were presented. In it, alumna Sidra Zubairi’s work paid tribute to what is now a memory by looking at Doha’s roundabouts, while Sara Al-Fadaaq used digital and analog techniques to explore and reference the history, psychology and social elements of Middle Eastern car culture.

In “Printer Up Above the World So High”, alumna Eman Makki focused on the unimaginable quantity of stars in the Milky Way Galaxy, which is estimated to contain more than 100 billion stars. Sitting on a plinth, a printer generated a series of marks printed continuously and in real time on a roll of paper. Data documenting the number of stars was entered into a bespoke software program, and each mark printed on the paper is placed by the software to approximate the variations in size and relative distance between stars in the Milky Way, with each mark representing a single star.

In the Tangible Spectrums section, alumnus Ala Bata used everyday subjects to create provocative scenes, such as with “Better Luck Next Time” (meranti wood, stainless steel and egg) in which an egg sits on a door handle. Painting and Printmaking Assistant Professor Michael Perrone’s work, titled, “Palimpsest: Drawings, Paintings, Sculptures” was the result of his continued research and investigation into the concept of monuments. Exploring both local and regional, as well as, several international sites, he was able to build a catalog of images - both digital, analog, and mental, that served as the inspiration for his works.

Alumna Nourbanu Hijazi’s work, titled “Demons” explored parallels between the perception of the paranormal and mental illness in the context of an Arabic Islamic society, and examined those ideas through the representation of the “Jathoom” (an evil jinn/spirit attacking people in their sleep), and sleep paralysis, a sleep disorder characterized by the temporary inability to move or speak when one is waking up or falling asleep. The creatures depicted in Nourbanu’s work were inspired by her own experiences with sleep disorders.

In The Edge Of Thoughts section, the artists explored memories and stories of belonging. Alumnus Abdulla Al-Kuwari’s “The Ancient Structure” aimed for a partial resemblance of a visual language from an era long gone, while the handwritten lyrics on Shaikha Al-Hardan’s “Reminiscence” gave a hint of how certain things such as music can trigger a specific memory to come to life. 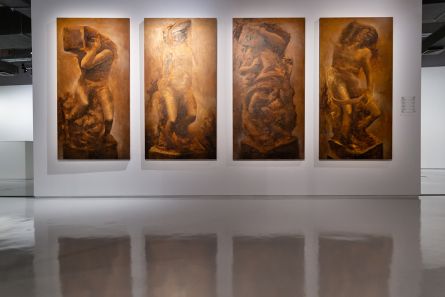 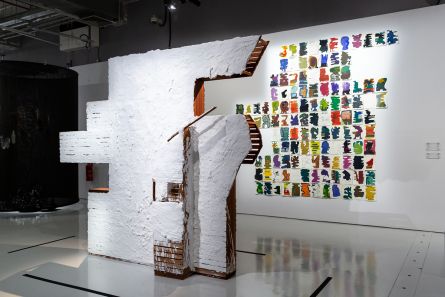 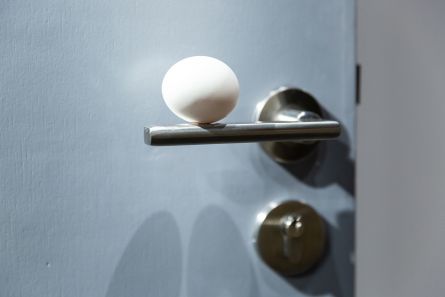 “Better Luck Next Time” by alumnus Ala Bata. 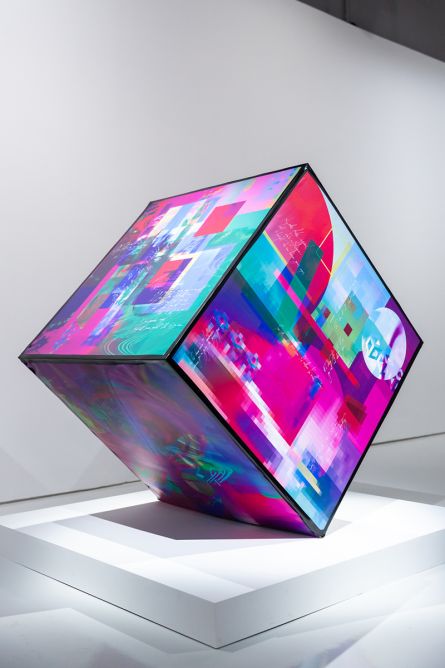 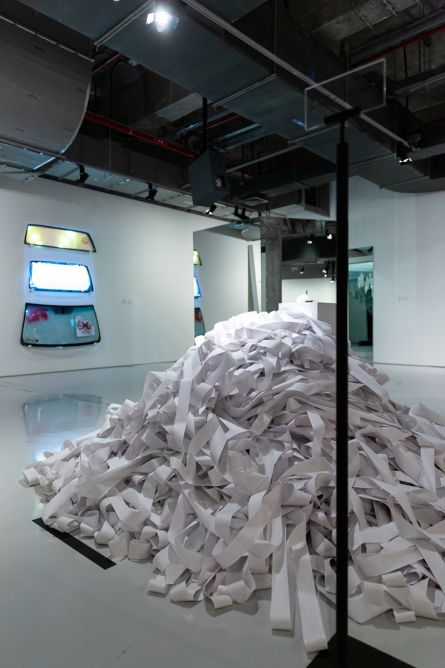 “Printer Up Above the World So High” by alumna Eman Makki.