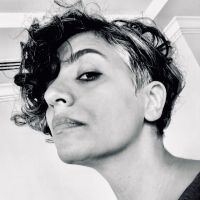 Maysaa Almumin is an Architect and independent filmmaker. She graduated from the Architectural Association School of Architecture in London. She has extensive experience in architectural practice in both London and Kuwait, where she was a partner in Small Architecture Ltd, London; and the Director of THEM Designers in Kuwait. She is a member the Architects Independent design collective.

Amongst her creative endeavors, Maysaa has worked on “Acquiring Modernity” at the Kuwait Pavilion for the Venice Architecture Biennale in 2014, which was curated by Kuwaiti artist Alia Farid. Maysaa curated the “Muhawwil (Transformer)” exhibition by Kuwaiti artist Monira Al Qadiri at the Gallery at VCUarts Qatar in 2018; exhibited her own work with Architects Independent at the Fire Station, Doha in 2020; and was an artist in residence at the Fire Station in 2020.

Her film work spans countries such as Kuwait, Italy, Egypt and Qatar, where she has developed a close creative relationship with the filmmaking community in Qatar and with the Doha Film Institute. An awardee of the Arab Fund for Art and Culture and the Doha Film Institute, her film Bint Werdan was in the official selection at the Malmo Arab Film Festival in Sweden and also at the Ajyal Film Festival in Qatar.