From chef to interior designer, a Class of 2021 interior design student shares her story of how VCUarts Qatar – and Qatar – helped fulfill her dream.

A career change calls for grit, and drive. This is especially true if it means having to attend university all over again. And, even more so, if you’re a mother to three.

Charlene Mukite, along with her husband and three children, arrived in Qatar in late 2015. A year into her settling down in the country, she began soul-searching.

“Up until then, I had pursued careers that were convenient – convenient to train for, or convenient in terms of employability, or convenient for work timings. I had worked as a chef and administrative assistant in Dubai, and as a trainee chef in Kenya. But once I came to Qatar, and I watched my three girls grow up around me, I realized that in order to raise them to be true to themselves, I first needed to be true to myself – and that meant doing what I love.

“I asked myself ‘When was the last time you did something that gave you a sense of accomplishment?’ And I immediately recalled the time I was involved in one fit-out and design project for a family-owned brand in Nairobi. That single experience had given me such joy and satisfaction, that years later, in Doha, I knew that was what I wanted to do.”

Mukite says she hadn’t heard of VCUarts Qatar – the name popped up when she did an internet search for interior design courses. After studying the BFA curriculum, though, she felt daunted.

“First came the waves of anxiety – would a prestigious American university accept a person of my age. Then, came the trepidation – the nagging self-doubt – about whether I would be able to juggle the demands of the program, with my role as a mother to three young children.”

When she gained admission at VCUarts Qatar, she was delighted, and stepped into what she describes “as four years on a treadmill, with intermittent breaks”.

“I would attend classes during the day, and rush home to be with my kids and my husband until 7 pm. Then after dinner, I’d work on my assignments, often past midnight. That was the routine for four years. This also meant that unlike most of my unmarried younger classmates, I had no social life; in fact, I’d text my friends telling them, ‘please don’t forget me’, or, ‘I’ll get in touch with you once I get a break,’ hoping they would understand.”

Mukite says that much to her relief, and joy, the new routine brought the family closer together. Her husband – who works with Qatar Airways – would step in and look after their children when she had deadlines to meet. And young though they were, her daughters understood when ‘Mummy had homework to complete’.

But it was one specific incident that made her realize just how lucky she “was to be living in Qatar.”

“In my Junior year at VCUarts Qatar, my oldest daughter fell sick. I was exhausted with the effort and worry of juggling course work and caring for her, as she was in and out of hospital for months. That’s when I realized that living in Qatar was a blessing. The healthcare system here is the best I have come across, and my daughter made a full recovery, thanks to the excellent care she received at Sidra Medicine.

“Additionally, residents like us have access to some of the best housing, education, recreational facilities and retail services in the world. These may seem small in the larger scheme of things, but for parents, these translate into better opportunities for our children, and peace of mind for ourselves.”

Prior to joining VCUarts Qatar, one of Mukite’s biggest concerns was how she would get along with students who were almost half her age, and whether, having had her schooling in an exam-oriented, textbook-based system, she would be able to cope with a technology-led curriculum.

“Interacting with younger classmates was like a breath of fresh air; I was exposed to the thought process of a different generation, inspiring me to think and look at things differently. My faculty were equally amazing in explaining processes and techniques. If it were not for their guidance and enthusiasm, I wouldn’t have enjoyed the course so much. Or attempted my final project.”

“In Kenya, the elderly is an overlooked demographic; homes – even those of the well-heeled – are not suitable or adaptable to the requirements of ageing residents. I wanted to explore how a living environment can aid aging in place. I held discussions with a Kenyan architect, and an interior designer, and for the thesis, I am proposed changes in the design that allows the elderly to continue living in their homes for as long as they can, without having to shift to old-age or retirement homes.”

As she graduates from VCUarts Qatar this year, the Kenyan says her journey and initial fears reflect those of all mothers.

“Once a woman becomes a mother, there is a sense of guilt attached with going back to work, or to study. This stems from society’s expectations of us. But what critics don’t understand is that women become better mothers when they feel fulfilled inside. It’s not about the number of hours you spend with your child; it’s about what you put into those hours.

“To any mother contemplating returning to studies, I’d like to tell them it’s not a walk in the park. When I joined VCUarts Qatar, my mind told me it wouldn’t be easy, but my heart told me it would be worthwhile. I was right.”

And, to those who questioned her decision to return to university at a later age, she has a response.

A project completed by Mukite and her team mates, at VCUarts Qatar. Photograph courtesy of Charlene Mukite. 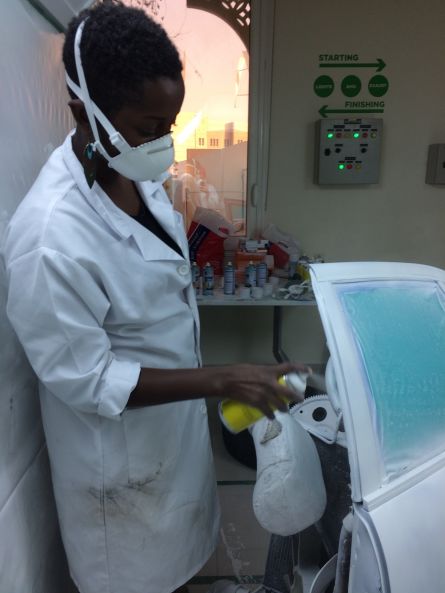 Charlene in the midst of a design project at VCUarts Qatar. Photograph courtesy of Charlene Mukite.