VCUQatar played host to leading figures from the world of film who were in Qatar as speakers at the Financial Times Business of Film Summit which took place on 22 and 23 March.

The speakers, whose list reads like a who’s who of Hollywood, interacted with faculty and students at VCUQatar as students presented their work and had the opportunity to be critiqued by the film legends. Mark Gordon, producer of The Mark Gordon Company (films include Patriot, Day After Tomorrow and 2012), Bill Mechanic, founder, Pandemonium Films and former chairman of Fox (films include Titanic, Braveheart and the animation Coraline), Jeremy Thomas CBE, producer and founder, Recorded Picture Company and HanWay Films (films include Crash and The Man Who Killed Don Quixote), Ivan Dunleavy, chief executive, Pinewood Shepperton plc.(films include Sherlock Holmes and Quantum of Solace ), Greg Coote, chairman and CEO, Dune Entertainment (recently co-funded Avatar) and Michael Andreen senior vice president, International Production, Walt Disney were in attendance at the afternoon session with VCUQatar students on 22 March.

After the presentations students asked the film makers about their favorite and least favorite movies, the challenges they faced in the industry and their proudest accomplishments. Mark Gordon said his favorite films were It’s a Wonderful Life, Godfather I, The Rules of the Game, Sullivan’s Travels, Days of Heaven, movies that he had seen at different times in his life that had inspired him. Jeremy Thomas said, “I love cinema in general, if you can use it well, that is what I like, that it has impacted my brain, moved me. It is very hard to have a favorite.” Bill Mechanic listed his favorite films as City Lights and The Bridge on the River Kwai. His advice to the students was, “If you want to study film, look at the film makers, their careers. Film makers like Preston Sturges, Frank Capra’s skills and poetry come up time and again.”

Speaking about the challenges the industry faced, Jeremy Thomas said resources to make a film would be a problem in the future. “Research shows that 85% of films today are unoriginal,” he said adding remakes, sequels and prequels were easiest to become successful today. Michael Andreen said the ordeal of making anything was so exhausting that one could lose sight of quality. “It is important to find that reserve that allows you to challenge yourself,” he said. Greg Coote agreed making films in the future would be challenging. “There will be fewer films made in the future and they will cost more. Cable TV is making lots of movies, covering a lot of subjects, making it difficult for the industry who will need to make fewer, bigger movies to succeed. There is no easy solution.”

Jeremy Thomas added, “You need to be thick-skinned to be in the business, to be able to accept criticism from the newspapers, your peers. You need a certain sort of personality, lots of self-belief, a lot of passion.” He said he never let his failures get him down as he moved on to dream about new things. Bill Mechanic said the answer was simple. “You can’t accept failure or you fall.”

One of the most important ideas the group of producers shared with the students was summed up by Jeremy Thomas who asked them to “tell your own story. Beyond the big, expensive films, it is the genuine, personal stories from all over the world that are important and becoming the future of cinema.”

Dean Allyson Vanstone thanked the visitors for their inspired contribution to VCUQatar students. “Our students are the beneficiaries of this rare and unique opportunity to show and discuss their work with the leaders of U.S. and U.K. film industries.” She also thanked Ahmed Al Hashemi, chairman of AlNoor Holdings, a leading private Qatari media and entertainment company and co-host of the FT Business of Film Summit, for bringing this esteemed group to VCUQatar and for inviting four faculty, staff and students to attend the summit. 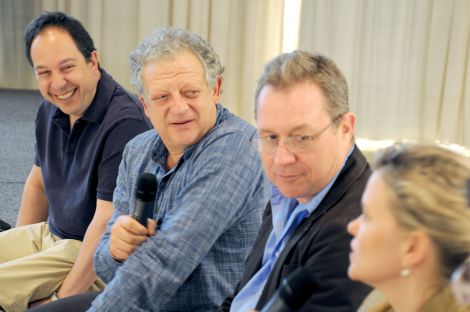 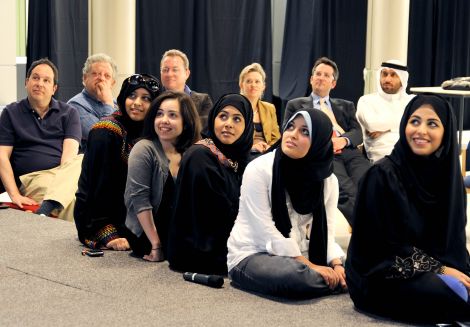 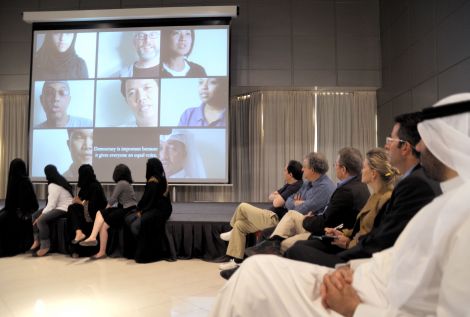 The visitors and student presenters watching the last video of the evening by Nada Al Saadi, VCUQatar alumna and graphic designer 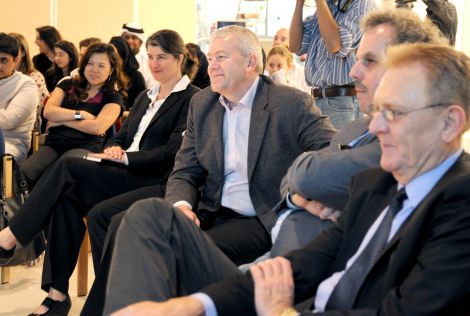 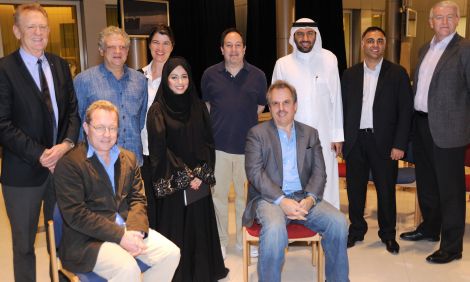