Virginia Commonwealth University in Qatar in collaboration with the Katara Art Center presents ‘The Ayaba Project’ a tribute to a disappearing traditional costume, by adapting it into a multicultural garment.

The exhibition is scheduled from 19 to 26 December with an opening reception on Wednesday, 19 December at 7:00pm at the Katara Art Center, Katara Cultural Village, Doha. The event is open to the public.

Taking inspiration from the traditional abaya as a starting point, the Ayaba Project set out to create a simple garment that may be worn, adapted and modified with or without accessories to create different looks for every single day of the year. VCUQatar Adjunct Professor of Fashion Stella Colaleo and fashion students Marion Sanguesa, Elizabeth Yang Soon Ju, Mona Al-Ansari (all recently graduated) and Maysaa Almumin, revisited the ever declining traditional abaya, now worn only by the grandmother and mother generations of Gulf women, and resurrected it in homage as a versatile multicultural garment to be shared by all women around the world.

Over the years the old traditional Gulf abaya has been abandoned in favor of more modern styles, with different feminine silhouettes, elaborate embellishment and, in true fashion statements, even some experimentation with color. While the new abaya has developed individuality, it misses some of the simplicity and versatility it had in its traditional form. With the traditional abaya the older generation were able to control the degree of coverage by choosing whether to place it on the shoulders, wrap and hold it around the body, or to wear it on the head and hold it closed with one hand (or additionally holding it across the face for maximum coverage). Those who are old enough will remember being covered with it like a bed sheet while they napped as children,  or being folded inside their mother’s abaya as she wore it, feeling small and engulfed in their mother’s arms and this magnificent, soft and light fabric.

The AYABA project (mirroring the word abaya), sets out to take the shape of this outmoded clothing and recreate its versatility, combining it with the desire for individuality that is provided by the modern abaya,  developing it further and extending it to women of diverse backgrounds and cultures as a celebration of this understated yet splendid garment. With simple modifications such as slits, attaching buttons and drawstrings, the Ayaba can playfully morph into endless variations, reflecting multicultural styles that reach across the world from East to West, while also presenting a variety of looks, from funky day to elegant evening wear. It can also retain its original function as a clothing of modesty.

Sandra Wilkins, chair of the Fashion department at VCUQatar, says “This Ayaba, I think, is reflective of the cross boundary living and experiences we are all exposed to in this day and age. I like that this once exclusive national dress becomes a sort of invitation into the Gulf culture and is an item I, or anyone, would like to have and am able to wear anywhere, anyhow.”

Al-Ansari adds, “The adaptability of this garment means I am able to wear the Ayaba as an abaya in public to maintain my modesty, and then I may quickly change into an elegant evening garment by adding glamorous accessories after I walk through the doors in private places. I don’t have to consider wearing an additional abaya. ”

For information on this project visit the blog:  www.fabcut.tumblr.com and http://vimeo.com/37308908 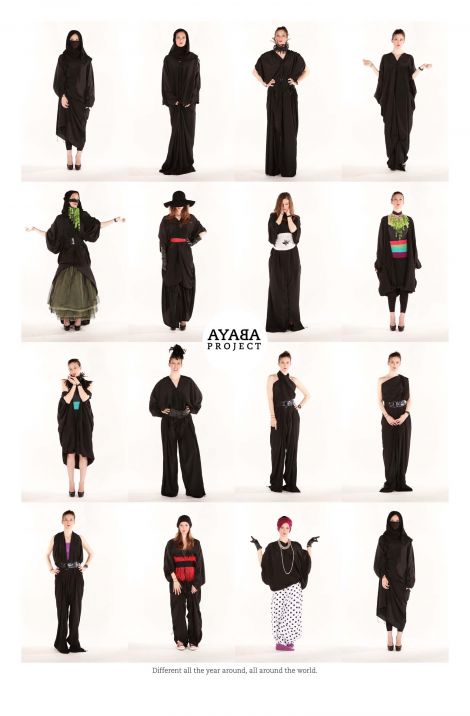