As part of the Crossing Boundaries Lecture Series, Virginia Commonwealth University in Qatar is proud to present Florian Ortkrass from Random International with a lecture titled “Minimal Information, Maximum Access.”

Random International responds to recent developments in cognitive science and new media by creating works that encourage an active relationship between people and their surrounding environments and explore behavior, reaction and intuition in relation to natural phenomena and the human form. The studio’s 2008 piece “Audience” reverses the roles of viewer and viewed within a spatial sphere, inviting onlookers into a hoard of small, anthropomorphic mirrors which then all turn to face them. Their ongoing “Swarm Studies” use light to simulate collective behavior, creating an autonomous, illuminated swarm that responds to those in its vicinity. “Rain Room,” for which the studio is best known, was exhibited at MoMA in 2013, following its debut at the Barbican Centre in 2012. The immersive installation is an environment of perpetual ‘rainfall‘ through which visitors can walk and yet remain dry.

In 2014, following a residency at Harvard University, Random International began new path of enquiry, considering the implications of life in an increasingly machine-led world. Resulting from these experiments, the developing body of work oﬀers a new dialogue between person and object, with a focus on the entire body as medium for engagement. In an age where machines are intrinsically embedded in daily life, and have an increasing position of control, influencing human relationships, the artistic treatment of the man-machine relationship raises crucial and critical questions of identity and autonomy.

VCUQatar’s Crossing Boundaries Lecture Series reflects the cross-disciplinary nature of the featured speakers who are representatives of excellence in creative and innovative thinking. 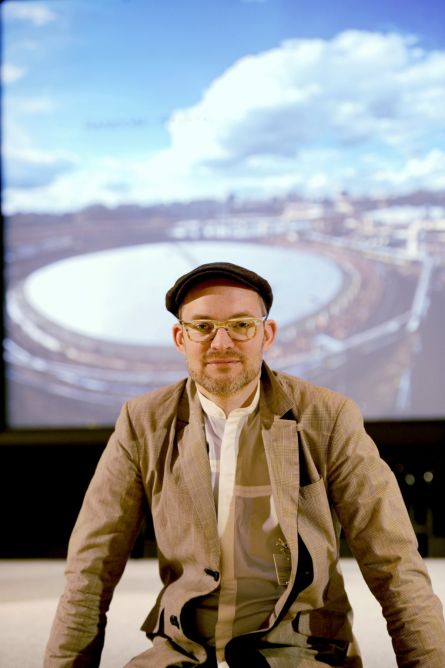