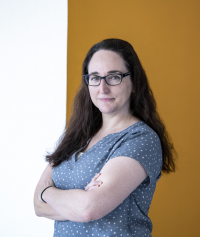 Ancient and Classical Art and Archaeology

Professor Bethany Simpson received her doctorate in Archaeology from the University of California, Los Angeles, and specializes in the material and visual cultures of the ancient Greece, Rome, and Egypt. From 2016-2017 she was a postdoctoral fellow with the Getty Research Institute, participating in their “Classical World in Context” research program, which focused on cultural transmission of art and material culture between the Classical Mediterranean and Near Eastern cultural groups.

In addition to archaeological work in Greece and Italy, she has been part of an ongoing research project in the Egyptian Fayum region since 2008. In 2015, she became director of the Northeast Fayum Lakeshore Project, which investigates several ancient sites, including the ancient town of Karanis (Kom Aushim). The goal of the project is to examine the chronological development of life in the Fayum from the early Ptolemaic Period to Late Antiquity (roughly 300 BCE to 600 CE), with various team members investigating agricultural activities and food preparation, climate change and adaptation strategies, trade and social networking, and daily life interactions with art and visual culture. It is currently supported in part by a grant from the Rust Family Foundation.

Dr. Simpson’s research focuses on the role of domestic architecture in providing the context for how people view the art and visual culture of daily life, with special emphasis on multicultural communities of the Roman Empire. Along with multiple articles based on her archaeological projects, she has a current monograph project focusing on wall paintings of Greco-Roman Egypt, exploring how the display of religious imagery was used to foster social cohesion within families as well as strengthen communal ties between occupants and visitors to domestic spaces. She has also participated in many symposia and conferences, and has a contribution in the forthcoming publication of the Cornell University’s conference proceedings, ‘Better To Dwell in Your Own Small House’: Households of Ptolemaic and Roman Egypt In Context.