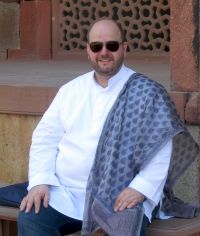 Jochen Sokoly holds a D.Phil from the University of Oxford and specializes in the Arts and Architecture of the Islamic World with a focus on the early Caliphates. He has taught at Virginia Commonwealth University in Qatar since 2004, where he also curated numerous exhibitions on art and design and convened public lectures as Gallery Director between 2005-2011. He has been a research fellow at the Metropolitan Museum of Art, New York and the Royal Ontario Museum, Toronto, and has worked as a UNESCO curatorial consultant for the Al-Sabah Collection, Kuwait National Museum, Kuwait for which he is preparing a publication on the museum’s collection of early Islamic inscribed textiles. As a Fellow of the Royal Asiatic Society, London, Dr. Sokoly has recently published on British India, particularly a collection of 18th century botanical paintings by the Indian painter Zayn al-Din, formerly in the collection of Sanskrit scholar Sir William Jones. Dr. Sokoly has also been instrumental in realizing the recent establishment of a Department of Art History at VCUQatar, with an undergraduate degree program that focuses on Islamic Art in a global context.

Sokoly, Jochen A., and Allison Ohta (2011). India: East / West: the age of discovery in Late Georgian India, as seen through the collections of the Royal Asiatic Society, London. Doha [Qatar]: Virginia Commonwealth University in Qatar.

Jochen Sokoly (2006). Languages of the pen: Arabic calligraphy from the collection of the Arab Museum for Modern Art, Doha. Doha [Qatar]: Virginia Commonwealth University in Qatar.

“A Textile Inscribed in the Name of the Amir Bukhtagin.” Ernst Herzfeld Society Annual Conference, University of Bonn, July 2006.

“Impact and Exchange: Foreign Materials and Techniques in Tiraz Textiles from Egypt under the Abbasid and Fatimid Dynasties.” Communities and Commodities: Western India and the Indian Ocean (11th-15th Centuries), University of Michigan, Ann Arbor.

“The Sigificance of the Term ‘ala yaday in Early Islamic Tiraz Inscriptions.” German Orientalist Congress, University of Bamberg, Germany, September 2001.

“Between Life and Death: the Funerary Context of Tiraz Textiles.” and

INDIA: EastWest - The Age of Discovery in late Georgian India as seen through the Collections of the Royal Asiatic Society, London

(in cooperation with the Bauhaus Archive, Berlin and the Vitra Design Museum, Weil am Rhein; VCUQatar, 7 February – 13 March 2007)

Qatar Now – Ceramics from the Workshop of Munira al-Meer

Languages of the Pen: Arabic Calligraphy from the Arab Museum for Modern Art, Doha

Contemporary Architectural Development in Qatar: The Work and Vision of Ibrahim Jaidah and His Design Studio