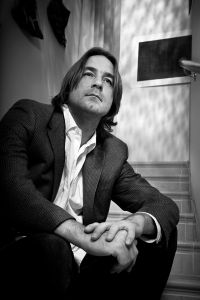 With a portfolio of work from 5 continents, Johan Granberg is a true world citizen of design. Johan has been engaged with the discipline of design since 1987: as an engineer, an architect, an educator, and a curator. He holds a Masters of Architecture from Chalmers School of Architecture in Gothenburg.

Johan combines his assistant professor role at VCUQatar with the reality of architectural practice under his own name J. Granberg Design. Founded in 2001, the office has sought and executed a number of projects ranging from furniture design, exhibit design and graphic design to architecture and urban design.

In addition to Johan’s built work, he has been exhibited internationally, received recognition for his participation in international competitions and is a frequent lecturer and critic at design schools and conferences worldwide. He is currently completing a PhD at the Royal Melbourne Institute of Technology.

Johan has held the Hyde Chairof Excellence in Architecture at University of Nebraska (2005-06) and was awarded the Rome Prize at the Swedish Institute of Rome (2006-07). In Spring 2005, he was invited by the foreign ministry of Finland to curate and design the Finish-Swedish design exhibition “Transformation” and in 2008 he curated the international design conference “On-Bamboo 08” in Lae, Papua New Guinea.

Johan’s research focuses on questions of how society and culture are held together, particularly on Making and Fabrication:

Johan has an anthropological design approach and, by his work, seeks to expand his research from various syntheses: art/science, theory/practice, material/ideas, concept/product, producer/user, tradition/innovation. These interests take the form of design laboratories that have investigated a variety of topics such as digital fabrication, material specific processes, the chair and the act of sitting in Western culture, objects generated from traditional eating, and the cultural act of the restaurant cue.

“ Making of the Exotic”

“ Design as Systems of Knowledge”

“The Take on the Take-on”

“The Cultural Act of the City”

“In-habitation” (the take on some of my projects)

”Interfaces and the Search of the Secluded Middle”