Liam graduated from Napier University in Edinburgh, Scotland in 1994 with a BA degree in Interior Design, before moving to the United States to take a position with a small specialist entertainment design firm in Florida. In 1998 Liam began working with Baltimore architectural firm RTKL Associates in the cross-disciplinary Id8 Group. Working alongside designers and artists from many different fields and backgrounds on a vastly diverse range of projects from architectural design, retail and entertainment projects to illustration, storyboarding and other, more conceptual work, had an important impact on Liam's professional portfolio and areas of interest.

This interest in cross-disciplinary design, and in particular those ‘gray’ areas where illustration, graphic design and architecture meet, has influenced subsequent professional and academic work. Liam completed his Masters of Design degree in Communication Design from Royal Melbourne Institute of Technology in 2011.

The research topic currently being explored by Liam reflects his interest in the collaborative, cross -disciplinary approach to retail design. In particular, Liam and Matthew Holmes-Dallimore, explore the places, structures and objects we create that help facilitate simple transactions in different cultures. This enquiry, and student outcomes from projects derived from this research, became an exhibition called Retail without Walls: Kiosk Culture, at Mathaf Arab Museum of Modern Art in 2012. 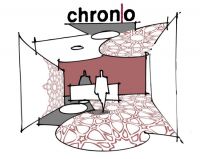