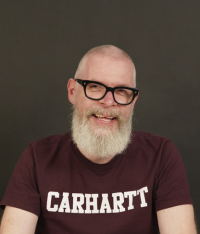 .(JavaScript must be enabled to view this email address)

Peter Welz was educated at the National-College of Art and Design (Dublin), at the Chelsea College of Art and Design (London) and at the Cooper Union (New York). On the one hand, his artistic works are known for their kinetic experimental arrangements; on the other hand, the cinematic plays a central role. In addition to questions about the status of the image, the sculptural and the question of the relationship between image and space, aspects of the figurative have recently been a particular feature of his work. Welz's artistic work also reflects his engagement with Samuel Beckett. He also became known for a five-part video installation created in close collaboration with choreographer William Forsythe. In 2020, Welz was one of 117 Berlin-based artists represented in the Studio Berlin exhibition at the Berghain techno club with a work entitled Fuck Your Loneliness. Works by Peter Welz can be found in the Goetz Collection, the Falckenberg Collection, the collection of the Museum für Moderne Kunst in Frankfurt am Main and the Centre Pompidou in Paris, among others.