Cirque du Soleil is known throughout the world for its spectacular shows which feature gravity defying acrobatics, stunning set designs and outstanding costumes which combine technology, artistry and science.

Emerging from its humble beginnings in Quebec in 1984 as a group of 20 street performers, Cirque du Soleil has reinvented circus arts and grown to become a world-renowned leader in live entertainment, enthralling more than 180 million spectators from 450 cities in 60 countries from across six continents. Cirque du Soleil’s spectacular mix of artistry, theatrics and designs combine the skills of 1,300 artists from more than 50 different countries together with a combined staff of 4,000 to produce content for a broad range of audacious projects.

Denise Tétreault joined Cirque du Soleil in 1991. She collaborated with costume designer Dominique Lemieux on multiple shows, including Fascination, Nouvelle Expérience, Saltimbanco, Mystère, Alegria, Quidam, “O” et La Nouba. She began as a seamstress and later worked as a buyer. The growing success of Cirque du Soleil led to Denise being mandated to create a supply department for its costume workshop, where she worked as an assistant to designers such as François Barbeau (Dralion) and Eiko Ishioka (Varekai). This in turn led to the establishment of a research and development department that catered to the costume workshop’s increasing demands for new materials and techniques as Cirque du Soleil’s shows became ever more spectacular. From 2006 to today, she worked as the director of the creative department for the costume department which produced up to three new shows a year. It now has more than 350 employees.

Mark DeCoste has more than 25 years experience in costume design. Besides working with the creative team at Cirque du Soleil, he has also worked among the most renowned theater and dance companies in Canada, Ex Machina, the Met Opera, Citadel Theatre, Franco Dragone Productions and the Vienna State Opera. At Cirque du Soleil he supervises the entire process of costume design at the creative department, from conception and design to creation and completion. As seamster, cutter, instructor, coordinator or assistant, his team player qualities and generosity in sharing his knowledge is well recognized in the costume community. Mark has worked with many talented costume designers and acquired an extensive knowledge of historical as well as contemporary costuming.

The Atrium at VCUarts Qatar & QNL 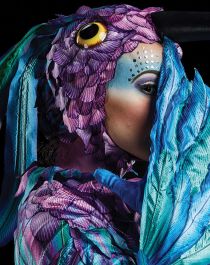