Virginia Commonwealth University in Qatar, in association with the Italian Embassy in Qatar, is pleased to host a talk by costume designer Anna Lombardi

World-renowned costume designer Anna Lombardi will illustrate the unique craft of costume design by examining the structure and methodology of the work and expertise it entails. As part of this lecture, she will take us take the audience on a behind-the-scenes journey by analyzing the costumes that were designed for a film set in the 1950s. The reciprocal influence between fashion and cinema will be highlighted, as well as the close relationship the costume designer has with the makeup and hair stylists, the cinematographer, and the director.

Anna Lombardi is a costume designer from Rome. She graduated with a BA in Fashion Design from Central Saint Martins in London. She was nominated for Best Costumes in the Feature Film Category at the Premio di Berenice awards for the film Anita B. by Roberto Faenza, and in 2018 for Best Costumes at the David di Donatello Awards, for the film Brutti e Cattivi. She is a member of the Executive Board of A.S.C. - the Italian Costume and Production Designer’s Guild, and is the Vice President of ARTSCENICO, the European Federation for Costume and Production Design.

The Atrium at VCUarts Qatar 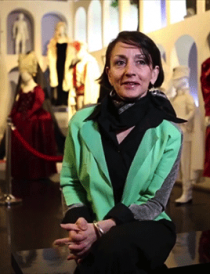