Circling Back, Stitch by Stitch

"My life has always been like those circular stitches that take you back to the starting point – no matter how far I travel, or grow, I can't forget how I started out, and how important it is to stay connected," says Sulthan Abdul Cader VCUarts Qatar's Technical Fashion Coordinator.

One needs to take a moment to understand Cader's journey so far, to appreciate the statement.

In 1996, Cader fled the civil war in Sri Lanka to join a tailoring design shop in what is currently the Fereej Al Nasr neighborhood, in Doha.

A quick learner with a natural gift for building relationships, it wasn't long before he set out on his own – within two years of his arrival he had started not one, but three tailoring units in Doha.

During that time, Cader designed and tailored a dress for the school-going daughter of an engineer who was part of a team engaged in infrastructure development in Qatar Foundation's (QF) Education City.

The finish and design of the outfit impressed the engineer – so much so that when he met Sandra Wilkins, the then Chair of Fashion Design at VCUarts Qatar, while visiting the University building as part of his work, he mentioned Cader's design and tailoring skills to her.

The timing couldn't have been better – Wilkins was on the lookout for locally-based talent to assist a rapidly growing design department. In 2001, Cader joined VCUarts Qatar first as an hourly hire, and then, as a full-time employee.

Today, as Cader helps young creatives at VCUarts Qatar transform their concepts into runway-worthy pieces, he often finds himself sharing the same techniques, tips, and short-cuts that were passed on to him when he first picked up a needle and thread – including not to waste a single button or piece of cloth.

"Coming from a family of tailoring designers in Jaffna, I was initiated into the profession when I was just ten," he says. "I'd finish school by late morning and rush to the tailoring shop owned by my father and uncles, who taught me the basics. This was just before the war started."

He says he still remembers the first complete piece of clothing he designed and tailored. He made it for himself.

"Growing up amidst financial difficulties taught me to value every scrap of material that came my way. So as soon as I learned the fundamentals of measuring, cutting, and stitching, I put together a small shirt and pair of shorts for myself, using cut-offs that I had collected over a year. I was probably around 13 at the time."

Even after Cader became a full-fledged tailoring designer who created everything from elaborately embroidered ethnic wedding outfits for locals, to stylish tops and dresses for tourists who visited Sri Lanka, he kept those two pieces of clothing for as long as he could.

"I don't have it anymore – they were destroyed when my house and family were attacked during the 1990's civil conflict," he says.

Cader says that each morning when he drives into QF's Education City, and parks his car in front of VCUarts Qatar, he feels fortunate to be able to work in an environment that nurtures education and where his skills are valued. It's something he doesn't take lightly.

"It's due to the Almighty that I met that engineer, and through him, Sandra Wilkins," he explains. "I was conscious that not everyone is this fortunate. I kept thinking of the dozens of skilled craftsmen, designers, and artists in Sri Lanka, people who were just as talented as me but didn't get such opportunities. I wanted to give back in whatever little way I could."

He continues, "Skills such as design and tailoring are what gave me a livelihood. I wanted to pass that on. In 2016 I set up a Foundation – I named it 'Sara Foundation', after my daughter. I bought sewing machines and appointed professional tailors to offer instructions to anyone interested in tailoring, irrespective of age or religion. Each time I fly to Sri Lanka for my annual leave, I make it a point to teach the students in person.

Working in Education City, Cader says he's seen first-hand how proper infrastructure can help people who are keen to learn.

"For over a decade, I've been financially supporting infrastructure development in Jaffna and Puttalam where most of my family, relatives, and friends reside," he says. "It could be a classroom, a washroom, a dining area, a roof, a well, a compound wall, or a road. These are not on the scale of the impressive buildings you see here; they're those bare necessities that make daily life a little better for those facing personal and social hardships."

After the civil war ended in 2009, Sri Lanka's economy started looking up thanks to a tourism boom. Cader continued the initiatives he had started during the war. He also continued the tailoring business – named 'Janseer Gents Tailor' – which he started with his younger brother in 1994. He is grateful he did, especially now, as his country grapples with an economic crisis of unprecedented proportions.

As he speaks about current food and fuel shortages in Sri Lanka that have made headlines across the globe, he is almost philosophical in his hope that "eventually the tide will turn" for his country.

"I often remind myself how I fled a country that was torn by strife and came to Doha with nothing but the shirt on my back," he reminisces, quietly. "When my father taught me to design and tailor clothes, I had no clue that decades later I would be putting those skills to good use in the branch campus of an American University, and through the money I earn by doing so, help support my countrymen back home.

"What have I learned through all this? That eventually, no matter how bad a situation is, the tide will turn. Until then, we need to keep our faith in humanity and watch out for each other. That's why I continue to help, even if it's something small. I know that it may be one small gesture – one stitch – that holds things together for someone back home." 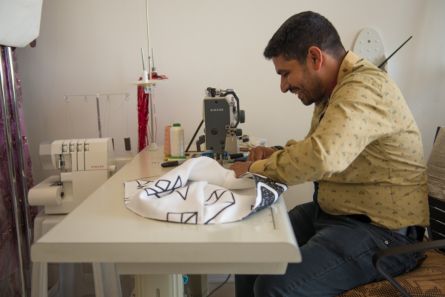 Sulthan Abdul Cader at work in his studio at VCUarts Qatar

For Cader, his childhood home (pictured here) in Jaffna brings back memories of his initiation into tailoring and design

With his savings, Cader (background, pictures with an apprentice) set up 'Sara Foundation' where he mentors students and young adults keen to learn the trade