Two VCUarts Qatar alumni – Kaltham Al Kuwari and Aysha Al Mohannadi – have been recognized for their work in interior design by the UK based International Property Awards. They won the award in the category of Residential Interior for the region of Arabia.

The award – often referred to as the ‘Oscars of the Real Estate world’ – celebrates the achievements and innovations of companies operating in all sectors of the property and real estate industry world-wide, and include categories such as architecture, real estate, interior design and development.

Interestingly, neither Al-Kuwari nor Al-Mohannadi had entered their work for the annual competition; rather, researchers working with International Property Awards spotted their projects online, while scouting for outstanding interior design executions in the Middle East.

“Around February we received a phone call from the International Property Awards to inform us that we had been shortlisted to for the Arabia region awards,” says Al Kuwari. “Both Aysha and I were amazed, as it was something we always dreamed of, but we didn’t expect it to happen so soon into our careers. I even asked them how they heard about us all the way in England. It was surreal; the reality sank in only when we received the entry invitation from them, by email.

“On their request, we arranged to submit our portfolio. Of course, at that point, one hopes; but one is also realistic – we felt that even if we didn’t receive an award, getting shortlisted by itself, was an achievement, and a sign of approval that we were moving in the right direction. So, we were beyond ecstatic when in September, they informed us that we had been awarded, and that though this year’s judging panel had a difficult time selecting the winners, our work really stood out.”

The designer duo says that the skills they picked up and the mentoring they received during their time at VCUarts Qatar – a QF partner university – were instrumental in giving them the foundation and the confidence to start their own studio called Design House Interiors (DHI), face the ups and downs of running their own business, and subsequently, win this award.

“We want to thank VCUarts Qatar for enabling us with the skills and knowledge that got us to where we are today – being recognized internationally by a discerning panel such as International Property Awards in the UK,” says Al Kuwari. “We are truly grateful for receiving a world class education in design and this has been noticeable to our clients in the quality of our work.

“Our professors at university taught us the value of a partnership. If you have a partner who can understand and support you, you face challenges with positivity. In our case, we complement each other’s skills. I can research, analyse, and design, while Aysha can visualise and transform my ideas into presentations for our clients.”

In fact, over the last two years as they were building up their team, they made sure to hire VCUarts Qatar alumni.

“We are lucky to have VCUarts Qatar alumni Fitrya Amanda, Faisal Egla and Manahil Mirza working with us today,” Al Mohannadi points out. “We see the same high standards and attention to detail in the designs they produce. This really helps us, as we have a better understanding of each other since we all share similar educational backgrounds and we were exposed to the same critical thinking approach.”

Al Kuwari and Al Mohannadi met during their time as freshmen in VCUarts Qatar. Having discovered their common passion for interior design, by the time they graduated, they had decided on their next move – to set up their own studio. In 2018, they started out in a modest ground floor room in the downtown Doha, under the label Design House Interiors (DHI).

The first few months were challenging, given the tendency of clients to hire only international designers for their projects. Eventually, an opportunity arose when an international designing group left a residential project in Doha, midway. The client, keen to complete the interior of the house and move in, approached the duo with the request to complete the unfinished project.

“It certainly wasn’t the launchpad we had in mind – but we seized it,” recalls Al Mohannadi. “We poured our heart and soul into it. So, you can imagine our delight when the client took a look at our work and remarked that the results we provided were far superior to those promised by international designers.”

Al Mohannadi says that though most designers have taste, what makes DHI stand out in the market is the intensive research that goes into each project, before deciding on the aesthetics – a tried-and-tested strategy they learnt at university.

“While at VCUarts Qatar, we would start with a concept presentation where we studied the core aspects such as circulation, project needs, and the space in terms of functionality,” explains Al Mohannadi. “After the class critique, we developed the design further by creating the technical drawings and 3D visuals. We follow this same approach with our clients. Our clients quite enjoy this tactic as they feel they are heavily involved from the start.”

And, she adds: “What we would like to point out is that it didn’t happen overnight; nor is it purely an innate ability. It’s years of practice, and having the humility to be corrected and start all over again.” 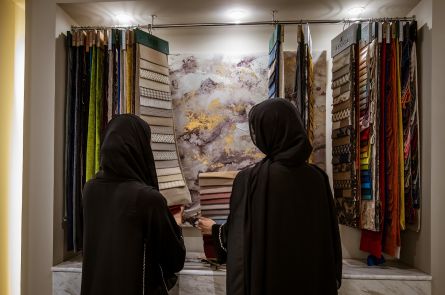 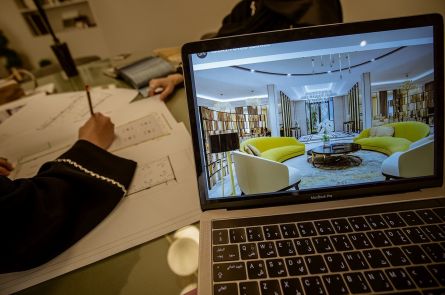