Virginia Commonwealth University in Qatars Graphic Design students design the logo for the 79th INTERPOL Conference 2010 that was held in Qatar from 8 to 11 November, 2010.

The project, to design a logo for the 79th INTERPOL Conference to be hosted in Qatar in 2010 as well as an instruction manual of how to use the logo for various applications, was developed within the Graphic Design department’s Senior Design Studio course in Spring of 2009.

The design team, under the guidance of Assistant Professor of Graphic Design Pornprapha Phatanatecha, comprised senior students Fatma Al-Madeed, (project manager/designer) and Rana Selo (designer) who began work on the project on February 15, 2009 after meeting with the client Brig. Khalifa Al Nasr, Director of Arab & International Police Communication Department and Head of NCB -Interpol Doha, and being briefed by him.

The design team worked very closely with the client from the conceptual to the final stage of the design. During the first week they developed an understanding of the look and feel of the project while also doing research for the logo. The second week saw the team develop concepts for the logo which they presented to the client for their approval. The concept that was accepted was based on Fort Zubara in Qatar. “This logo carries a monumental element of Qatar. In the past, the fort was used for the protection and security of the people,” said Ms Phatanatecha explaining that the students referenced this concept by looking into places or symbols in Qatar that suggested the idea of security and protection.

In the third week with a concept to work on, the logo took various design directions which were presented to the client for their feedback. The short-listed logos were selected for presentation in the fourth week and by March 12, 2009, the final logo was delivered to the client with the logo instruction manual. VCUQatar alumna, Khawla Saad Al Kuwari, a graphic design graduate herself, was instrumental in bringing the project to VCUQatar and participated in the critiques at various stages and final presentation as well.

The logo has been used in all media collateral related to the INTERPOL 2010 conference including stationary, advertisements, brochures, banners, roll ups, publications, trophies, medals, and certificates. VCUQatar has raised a one semester scholarship with this project.

The 79th Session of the General Assembly of the International Criminal Police Organization in Doha hosted delegates involved with internal affairs and public security from all over the world including INTERPOL presidents, policemen, officers, politicians and security advisors and consultants.

Brig. Khalifa Nasr Al-Nasr, also chief of the organizing committee for the 79th INTERPOL General Assembly hosted in Doha, expressed his thanks and applauded the students of VCUQatar for their excellent efforts in designing the emblem for the 79th INTERPOL General Assembly being held in Doha during 8-11 November 2010. He said that the emblem was excellent and meaningful.
“The cooperation between the Ministry of Interior and VCUQatar is constructive and fruitful. It comes in the context of Ministry of Interior’s keenness in opening channels of communication and contact with different institutions of the state and in particular the civil and educational institutions that consist of Qatari students with creativity and competence”, he added. He wished the students success and excellence in their creative endeavors and academic life.

“I would like to congratulate the students for their excellent design solution,” said VCUQatar Dean Allyson Vanstone. “The professionalism and innovation reflected in the INTERPOL logo design is an example of the quality of design education students at VCUQatar receive. Partnerships, like the one we have forged with the Ministry of Interior serve as an excellent opportunity to enrich our student’s classroom experience,” she said. 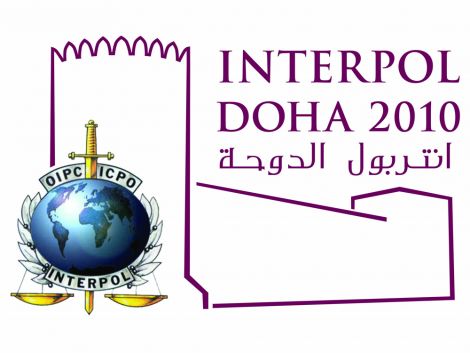 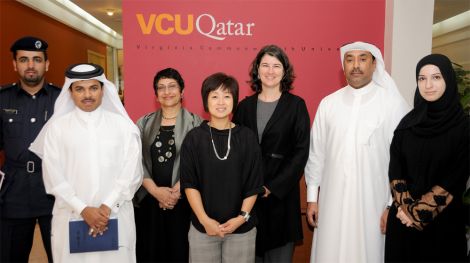