As part of the Image, Word & Voice Lecture Series, VCUQatar is presenting a lecture by William Dalrymple entitled White Mughals on Tuesday, 30 March, 2010 at 6:00 PM at the Atrium in VCUQatar.

Set in and around Hyderabad at the beginning of the nineteenth century, White Mughals tells the story of the improbably romantic love affair and marriage between James Achilles Kirkpatrick, a rising star in the East India Company, and Khair-un-Nisa, a Hyderabadi princess. Pursuing Kirkpatrick's passionate affair through the archives across the continents, Dalrymple unveils a fascinating story of intrigue and love that breaches the conventional boundaries of empire. As Kirkpatrick gradually goes native, he becomes a secret agent working for his wife’s royal family against the English, as he tries to balance the interests of both cultures.

However, White Mughals is by no means just an exotic love story. It is a vehicle for Dalrymple's understanding of the complex legacy of the English Empire in India, that he defines more in terms of exchange and negotiation than dominance and subjugation. It is a powerful and moving plea by Dalrymple to understand the cultural intermingling and hybridity that defines both eastern and western cultures, and a convincing rejection of religious intolerance and ethnic essentialism. Elegantly written and at a pace that belies its length, White Mughals confirms Dalrymple's status as one of the most important non-fiction writers of his time. (Jerry Brotton)

William Dalrymple, a fellow of the Royal Society of Literature, the Royal Asiatic Society of Great Britain and Ireland in London, and founder and co-director of the Jaipur Literature Festival, was born in Scotland and brought up on the shores of the Firth of Forth. His acclaimed bestseller In Xanadu won the 1990 Yorkshire Post Best First Work Award and a Scottish Arts Council Spring Book Award. With City of Djinns (1994 Thomas Cook Travel Book Award and the Sunday Times Young British Writer of the Year Award), From the Holy Mountain, his acclaimed study of the demise of Christianity in its Middle Eastern homeland (Scottish Arts Council Autumn Book Award for 1997), The Age of Kali, a collection of his writings about India (French Prix D’Astrolabe in 2005), and The Last Mughal (Duff Cooper Prize for History and Biography 2007) he established himself as a prolific writer and scholar internationally.

White Mughals, the subject of his lecture at VCUQatar, was published in 2003, and won the Wolfson Prize for History 2003, the Scottish Book of the Year Prize, and was shortlisted for the PEN History Award, the Kiryama Prize and the James Tait Black Memorial Prize. Dalrymple wrote and presented the television series Stones of the Raj and Indian Journeys, which won the Grierson Award for Best Documentary Series at BAFTA in 2002. His Radio 4 series on the history of British spirituality and mysticism, The Long Search, won the 2002 Sandford St Martin Prize for Religious Broadcasting. He holds the degrees of Doctor of Letters honoris causa from the University of St Andrews, an Honorary Doctorate of Letters from the University of Lucknow and in March 2008 won the James Todd Memorial Prize from the Maharana of Udaipur. William Dalrymple is married to the artist Olivia Fraser and lives and works in New Delhi.

The Image, Word & Voice lecture series is sponsored by the Liberal Arts and Sciences program of VCUQatar and was established to signify the relationship between these three modes of communication. The series is intended to supplement students’ education by extending the range of visitors to which they are exposed. 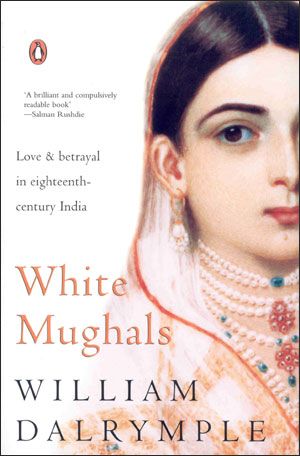 The cover of White Mughals by William Dalrymple