Virginia Commonwealth University in Qatar Assistant Professor of MFA.DESIGN. (Master of Fine Arts in Design Studies) Thomas Modeen is participating in the summer design and fashion exhibition entitled Home Sweet Home, organized by the Pro Artibus Foundation at Elverket in Tammisaari, Finland from 25 May to 7 October, 2012.

The exhibition is curated by industrial designer and silversmith Mikael Nygard. Modeen is presenting three pieces of work - the Cu3o Cabinet, the Bowls Interrupted, and some Laser Toast - at ‘Home Sweet Home’ which showcases the work of ten designers with roots in Finland, but who live abroad and have made a career there.

Originally designed and modeled over twenty years ago in New York during Modeen’s time at Parsons, the Cu3o Cabinet was prototyped in London at full-scale during his final year at the Architectural Association School of Architecture, and eventually built into its (for now) final form very recently in Doha. The Cu3o Cabinet consists of a set of proportionally synchronized wooden boxes with industrial strength Velcro on its top and bottom (and some select interior) surfaces. This allows it to be assembled into a variety of, often surprisingly ‘just wrong’ looking, compositions.

Modeen considers his Laser Toast a fandango food folly of sorts. He used a laser-cutter to cut/ etch toast - some slices of bread - for a Peanut-Butter & Jelly Sandwich. Each of the sandwich slices is divided into twelve, numbered and matched ‘bites’. Each bite includes corresponding, same size, cavities that secure equal quantities of both peanut-butter and jelly. The cavities of the middle slices are misaligned in comparison to each other to make sure they don’t mix and become too gooey before the mastication phase. A number of different cutting settings were used to create a variety of bespoke cuts across the toast planes. The ‘toasting’ patterned (wave-like) cuts are dense and shallow; the ‘bite’ cuts are a bit deeper to allow for each of the twelve bite segments to break off; and the cavities for the peanut-butter and jelly have been cut all the way through.

Bowls Interrupted is from Modeen’s Interrupted Design series, where the FDM (fused deposition modeling) fabrication process is intentionally interrupted mid-build to reveal the inner support structures, a feature that consequently becomes a key characteristic of the final design. The stackable bowls and trays have all their particular, often quite subtle, variations in function, use and execution. The connection point of the bowls and trays are uniform, and can be stacked in any sequence desired.

Thomas Modeen has a BFA in Product Design from Parsons School of Design in New York, an AA Dipl. (MA) from the Architectural Association in London, an MPhil. from the Royal College of Art in London, and completed a PhD in collaboration with the Additive Manufacturing Research Group at Loughborough University in the UK. As an architect with one foot in academia, the other in practice, he’s worked, researched and lectured in Europe, Asia, North America, Australia and the Middle-East.

Dr. Modeen is interested in designing environments and objects, both small and big, the people that use them, the technologies/ machines that make them, and the perceptual and sensory patterns that define and unite them. His current research explores the use and logistics involved in realizing physical things through various (both subtractive and additive) Digital Fabrication (CAD/CAM - 'Buildware') technologies, and how such mediums and methods can be applied in the design of both artifacts and environment.

Modeen’s work will be featured this June in the exhibition Home (an exhibition of the Arabic home) at the Museum of Architecture in London. Modeen will also be seen in an episode of the TV show “Jaakko ja maailmanvalloittajat” (by YLE, the national public service broadcasting company of Finland) in the fall. Modeen is the co-chair of Tasmeem Doha 2013, the largest international design conference in the Middle East which is hosted biennially by VCUQatar. Tasmeem Doha 2013 will take place in March 2013. 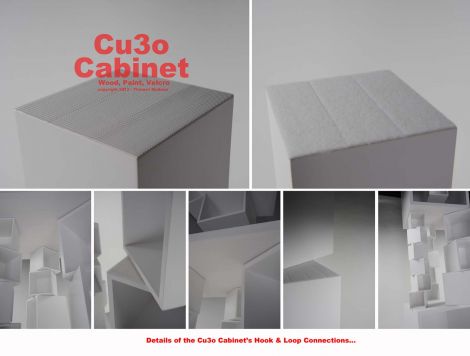 Details of the Cu3o Cabinet’s hook and loop connections 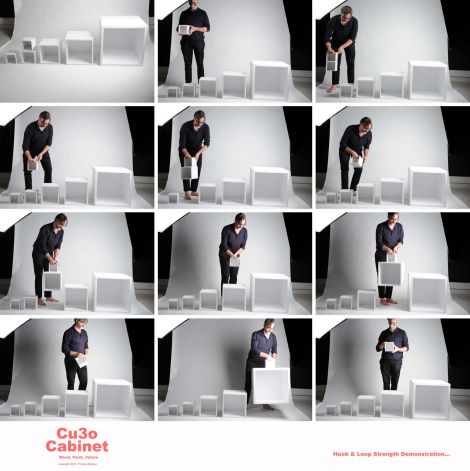 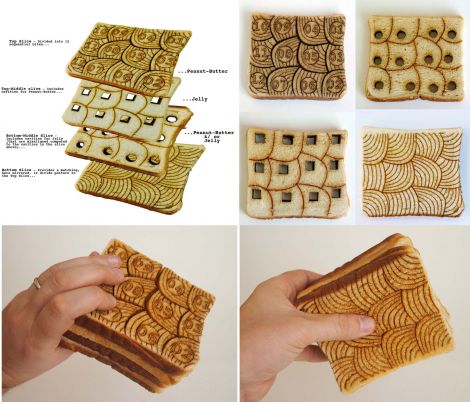