Collections by students from VCUarts Qatar’s Fashion Design program were on display during “Appliqué”, the two-day fashion show on April 12 and 13 2017, which was hosted by Salam Stores at The Gate Mall.

This unique show, which featured the collections of 22 sophomore, junior, and senior fashion students, was opened by Sandra Wilkins, VCUarts Qatar’s Chair of Fashion Design.

Wilkins explained that the title of the fashion show was “Appliqué”, which depicts the building of talents and skillsets, while showcasing the ability of students to take a concept all the way through to completion. She also described how important the show is both for the students and for Qatar’s fashion design industry.

The students had to submit their designs to a jury of fashion experts who are strong supporters of VCUarts Qatar’s fashion design program, and who would select the best designs for the show. “Only one garment was eliminated during 2017’s jury selection, which speaks to the quality of the clothes,” said Professor Wilkins, explaining that such an occurrence was highly unusual.

Also presenting their designs at “Appliqué” were several students from the fashion design program from the home campus from Richmond, Virginia.

Ahmed El Sayed, the co-founder of House of Nomad and VCUarts Qatar alumnus, was the guest designer for the show, where his most recent collection was presented to great acclaim.

The fashion show allowed the students to be judged by experienced jury members who have a thorough knowledge of the fashion industry. 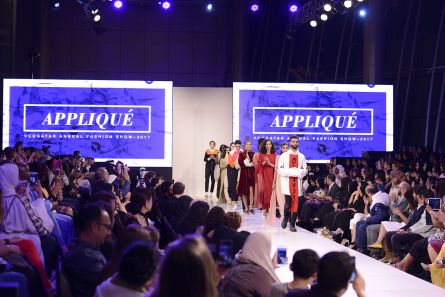