What is the home in the 21st century?

How is the perception of ‘home’ changing in rapidly developing countries such as Qatar, and particularly in an era of mass migration?

A travelling exhibition called Domestic Affairs, which is at the Garage Gallery at the Fire Station in Doha until May 15, asks these questions, and highlights a number of related themes.

Technology, privacy, and identity are three of the themes.

Initiated by Bureau Europa and curated by Giovanni Innella and Agata Jaworska, this third edition of Domestic Affairs is in partnership with VCUQatar and the Doha Fire Station - Artist in Residence. Previous Domestic Affairs exhibitions have taken place in Cologne, Germany, and in Shenzhen, China.

An alarm clock armed with a cane (entitled ‘Prayer is Better Than Sleep’), a glittery smart shoe (‘Beyond the Stated Function’) and a BlackBerry smartphone sit alongside mannequins, video art, and a stride-stopping tapestry (‘Magic Carpets’) make the viewer consider what constitutes today’s home.

A painting of CIA whistleblower Edward Snowden might be yet another reminder that the idea of absolute privacy in the 21st century home is nothing more than pure fantasy. This is especially interesting after the mainstream media claimed that some smart TVs could be controlled by hackers, thereby allowing them to see and hear what is going on in your home.

The aim of the exhibition is to provoke thoughts, questions, and discussions, because one might argue that the home is sometimes taken for granted. It is, after all, the greatest investment most of us will make. However, technology is having a profound effect on how the home is perceived by designers, and those who own them, and live in them.

“For better or worse, the smart home is the new New Domestic Landscape,” argues Justin McGuirk, the Chief Curator at the Design Museum and the head of Design Curating & Writing at Design Academy Eindhoven, writing in e-flux.

He describes the smart home as “the house-shaped manifestation of the internet of things, according to which all our devices and appliances will join the network, communicating with us and each other.”

Feelings of belonging are also explored in the exhibition, as the idea of home is more than just ‘bricks and mortar’. ‘Spice Pills’, by Aisha Al-Sowaidi is an examination of the senses and of identity. She notes: “As Qataris, we use saffron and cardamom a lot in food. Their smell is remarkable and has an effect on how we smell. Perhaps someday we will have the need to smell like we’re at home, starting from within.”

‘Distance to Gaza’ a series of ceramic plates, by Mamon Ashreteh of the International Academy of Arts Palestine, and the Disarming Design Team, ‘connect different locations in the world to Gaza, whose borders are locked.’

Also on display is the ‘World Passport’, by the World Service Authority. It was set up in 1954 by Garry Davis, who cited Article 13 of the Universal Declaration of Human Rights, which says thus: ‘Everyone has the right to leave any country, including one's own, and to return to one's country.’

To categorize Domestic Affairs as being about technology, privacy, and belonging does not remotely do it justice. It is also about innovation, and even fun.

‘Woolfiller’ by Heleen Klopper enables you to repair holes and hide stains in woolen jumpers, cardigans, jackets, carpets, and other household goods.

‘Investment is Invisibility (screw)’ by Droog Lab with Metahaven is a new twist (pardon the pun) on simultaneous security. It sells itself as ‘A discrete way to secure value in the home. Each screw is 32 grams of 24-carat gold’ and could be hidden in wood or other materials.

‘Potato Table Ware’ by DUS Architects uses potato starch and 3D printers to create printable ‘porcelain’ to create tableware pieces. The designs are all based on the shape of the potato being used in the printer, leading to different shapes every time.

Formed by thousands of highly complex multicolored cons, ‘Dutch Sky’, a wallpaper by Karel Martens, recreates a photograph of the sky taken on the day the artist’s grandson was born.

It exhibition will be open until May 15 at the Fire Station Gallery. 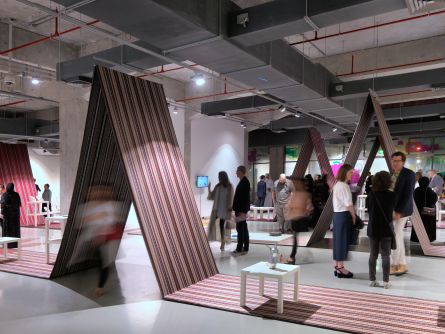 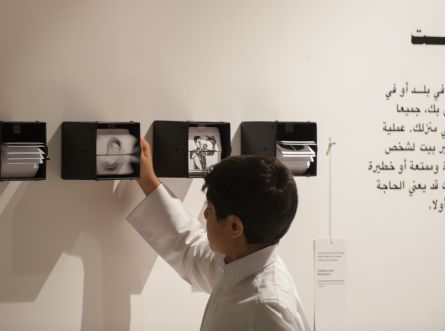 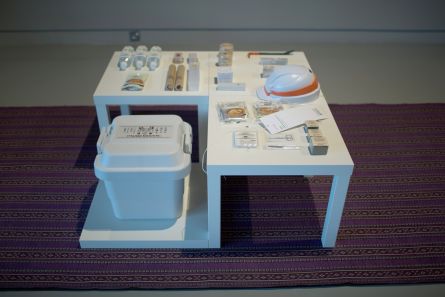 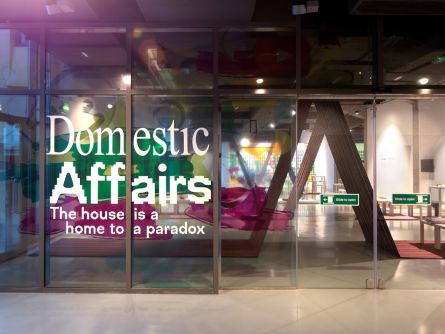