Designer Jake Dyson will deliver his lecture “Lighting for a Lifetime” followed by a demonstration of his latest designs.

Jake Dyson claims that along with sport, design was the only thing he was good at while in school.  By the age of 14 he learned the skill of using a mill and a lathe.  Seeing how parts and components were made fascinated him and he became inspired by mechanisms, innovation and technology. He believes that understanding the manufacturing processes is pivotal to designing and innovating and this is one of the cornerstones of his namesake company founded in 2004.

Dyson studied Industrial Design at the prestigious Central St Martins College of Art and Design.  He graduated in 1994 and began work designing retail interiors for two high profile designers.  In 2004, he set up his own workshop, purchasing a mill and a lathe and started experimenting with a revolutionary new ceiling fan.  Today, his studio is based in Clerkenwell, the heart of London’s design scene.

Dyson has created an enviable list of products. His CSYS LED task light features thermal management technology to cool LEDs, ensuring they run at peak performance for at least 37 years. Most recently, he launched the Ariel range of suspension lights that use proprietary technology resulting in a highly efficient and effective light for commercial environments. 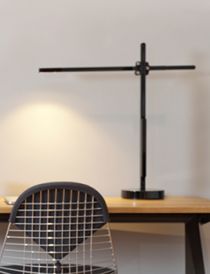