Conference co-hosted by VCUarts Qatar discusses the possibility of life outside of earth, and its impact on religions. Online event draws attendees from various faiths

‘Is there life beyond earth?’ - It’s a question that has probably existed as long as mankind has, spurring debates and discussion in scientific, cultural and religious circles, and spawning films and books that fed, and continue to feed, public imagination.

Lately, the question, and its repercussions on religions, resurfaced when the James Webb Space Telescope was launched on Christmas Day, December 25, 2021. The successor to NASA’s flagship Hubble Space Telescope, the telescope is designed to make detailed observations of nearby exoplanets as well as of distant galaxies, triggering hope that it will also detect life elsewhere in the universe, if it exists.

In this context, Dr. Jörg Matthias Determann, Associate Professor, Liberal Arts and Sciences, VCUarts Qatar, and Dr. Shoaib Ahmed Malik, Assistant Professor, College of Natural and Health Sciences, Zayed University, UAE, organized an online conference titled ‘Islamic Perspectives on Exotheology’, on May 10 and 11, 2022. The partner for the conference was Religion and Astrobiology in Culture and Society (RACS) network. RACS is based in St Mary’s University, in the UK, and the Lanier Theology Library, Houston, in the US, with institutional support from the University of Notre Dame, in Australia, and Rice University, in the USA.

Dr. Determann explained the theme of the conference, and its significance thus, “Over the last 30 years, humanity has discovered thousands of planets orbiting stars other than our sun. Future advances might thus hold an answer to one of our biggest questions: “Are we alone in the universe?” If there are other civilizations out there, we will inevitably ponder how special or unique we are in the cosmos. We might also wonder how universal our world religions are. Our conference has sought to prepare us for such philosophical and theological matters.”

The conference, which was attended by scholars from across the globe, examined questions such as ‘What would it mean for existing religions if we find out that there are advanced civilizations with different faiths and belief systems out there’, and ‘Do humans still enjoy a special relationship with God if there are other sentient and perhaps smarter beings?’, with reference to Islam.

One of the attendees of the conference was José Funes. Funes is an astronomer at National Scientific and Technical Research Council in Argentina and Professor of Philosophy and Theology at the Catholic University of Cordoba, in Argentina. Armed with a masters' degree and a doctorate in astronomy, one of Funes’s key areas of research over the past few years has been the Search for Extra Terrestrial Intelligence or SETI. Yet, being an astronomer isn’t the only reason why he was attracted to the conference.

Funes is also a Jesuit (Society of Jesus) priest who has spent years exploring both theology and astronomy, and the areas that either overlap or diverge in both fields. His qualifications opened opportunities to take up roles that straddle both – in 2000, he joined the Vatican Observatory Research Group as staff astronomer. And in 2006, he was appointed by Pope Benedict VI as the Director of the Vatican Observatory in Italy, a post he held until 2015.

Following his retirement, he returned to Argentina, where he continues his research in SETI. In a Zoom interview, Funes explained why he was interested in the conference, and how it ties in with his interests.

“My studies in astronomy started with binary stars, then I moved to studying our own galaxy, then nearby galaxies,” he said. “It was around that time that I was made the Director of the Vatican Observatory. In that post I organized a conference for astrobiology, that is the search of life in the universe, other than on earth. It turned out to a turning point for me; I realized that it was an area that I’d like to explore further.

“When I returned to Argentina, I helped form a group called ‘Project OTHER’. It stands for Otros mundos, Tierra, Humanidad, and Espacio Remoto , which in English translates as ‘Other worlds, Earth, Humanity, and Remote Space’.  The group resembles a think tank that studies the possibilities of life outside of earth. As our group explored the topic further, we were fully aware that the question of life outside of earth is one which needs to be approached not just from a scientific point of view, but from the lens of other disciplines as well, such as the social sciences, philosophy, and theology.

“With my background in theology, I was keen to learn how other religions, especially the predominant ones such as Islam, Judaism and Hinduism viewed the question. That’s when I came across information about the conference titled “Islamic Perspectives on Exotheology”. I was drawn to it as I had never attended a conference that looked at the possibility of extraterrestrial life from the perspective of Islam.”

Funes says the conference not only gave him a glimpse into how Islam perceives the notion of extraterrestrial life, but it also made him ponder the significance of the conference from a different vantage point.

“When I attended the conference, it was encouraging to see how people from various religions came forward, keen to discuss and listen to different perspectives on a topic such as extraterrestrial life,” Funes said. “I learned that in the Quran God is known the ‘Lord of the Worlds’. I think that this name of God and other names, coming especially from the monotheistic religions, can help us to achieve a better understanding of the Creator beyond discussing the topic of extraterrestrials in the perspective of our exotheology studies”.

“In addition to that, I couldn’t help wondering what the outcome would be if religions and cultures were willing to collaborate, to come together, work together and share knowledge on issues that affect this planet. For instance, this conference could motivate similar inter-religious or inter-cultural deliberations on climate change, the environment, and world peace.

“In our capacity as human beings, perhaps this conference is a gentle reminder of the value of life; that we must present a united front in nurturing life on earth, as we search for life outside of it.”

Screenshot from the conference - contributed by Dr. Jorg Matthias Determann. 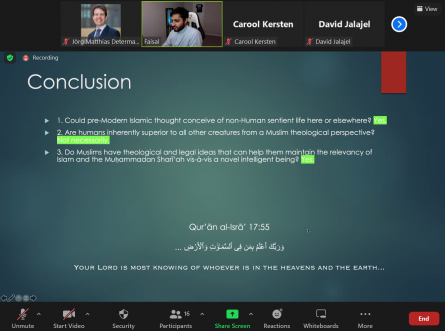 A screenshot from the conference