Learning, from Son to Father

When Faheem Khan decided to study design at the undergraduate level, he was breaking away from societal conventions and family expectations. Coming from a family line of specialists in either engineering or business, his acceptance into VCUarts Qatar meant that he would be the first in the family to enter an art and design university

That was in 2015. Today, after having graduated in 2019 with a BFA in Graphic Design, earned a place on the Dean’s List several times, participated in three Student Leadership Exchange trips/Semester Abroad programs, served on VCUarts Qatar’s Search Committees, elected as the Student Government Association President, and worked part-time in Student Employment Positions at Texas A&M University at Qatar, VCUarts Qatar’s IT department, FabLab and PrintLab, Faheem Khan graduated with an MFA in Design from VCUarts Qatar this year.

He is proud. Yet, for Faheem, there is one achievement that is as significant as the accolades and degrees he’s earned over the years at VCUarts Qatar – his father’s acceptance, and recognition, of his choice of study, and career.

In this conversation, Mohammed Shahjahan Khan, Faheem’s father, and Farzana Ahmed, his mother, recall how their son brought about a radical shift in mindset about career choices. And, about design itself.

From the perspective of your children’s education, what was the context when Faheem applied to VCUarts Qatar?

Mohammad Shahjahan Khan: I was an engineer working with Qatar Electricity and Water Company at Ras Abu Fontas. My wife is a home maker. Our life in Qatar was similar to that of most expatriates here. I came here from Bangladesh to make a living, for a better quality of life, and much like many parents from my country, I had hopes that my sons would pursue my path, or at least take up studying the sciences.

I have three sons. Faheem is the third. By the time his turn to apply to university came by, my eldest son, Farhaan, having chosen the commerce and business streams for his undergraduate studies, was pursuing an MBA in finance in Australia. My second son, Mouhyemen, had gained admission into TAMUQ where he was studying Electrical Engineering.

What was your response when Faheem said he wanted to study design at VCUarts Qatar?

As most Southeast parents would, we had expectations from our children – we came here from Bangladesh, we sacrificed a lot, and we wished that our children do well in life. By ‘do well in life’, I mean study and take up a job in a respected and recognized sector. And studying design was not something that fit into that formula. At that point, I couldn’t imagine how a career in design could provide a sustainable or respectable livelihood. So, yes, I was worried.

As my first son had taken the business stream, I talked to my second son and convinced him to take up engineering. When it came to Faheem’s turn, though, I preferred to keep quiet, partly because I was disappointed and partly because I was outranked – my two older sons were supportive of Faheem, and so was his mother.

Farzana Ahmed: I could read my son through and through. I knew his capabilities more than anyone did. For the same reason, I have always been his staunch supporter. When he was a child and then a teenager, I noticed how he could make informed decisions; how focused he was on whatever he chose to do.

When Faheem said he wanted to study design, I knew he would excel in it. As did my other sons. In fact, my second son, Mouhyemen, much like Faheem, was an equally good creative. They’ve both won several school-based and Doha-wide art or design competitions throughout their school years. So, when it came to Faheem’s turn to join university, both my older sons and I supported Faheem’s decision. But it was obvious my husband was disappointed. His silence, and inability to discuss the matter, spoke volumes.

So, what did it take for both of you to reach the same level of acceptance that your third son did indeed make the right choice?

Mohammad Shahjahan Khan: I know this sounds archaic, but even in these times and in this century most of the parents from the subcontinent still look at grades as the only factor that defines their child in school and university. But that is the way things are, and I was no exception. By the end of his first year at VCUarts Qatar, Faheem had made the Dean’s list. When I met his professors in university, they told me he was an excellent student. That was the beginning; mollified, my attitude changed, albeit slowly.

Another comforting factor was knowing that Faheem had access to resources in Education City, and specifically, in VCUarts Qatar. When I first visited VCUarts Qatar, I’d hardly been inside an art and design university before, and certainly not one as well-equipped as this. For someone who had little knowledge of art and design, the place seemed to be bursting with state-of-the-art material, technology, and labs. I’d say it took me around two years to reach a point where I accepted that Faheem had made the right choice.

Farzana Ahmed: The university’s presence in Qatar Foundation’s education city was another aspect. We were familiar with EC (Education City) through our second son who studied at TAMUQ. So, we knew Faheem would still be in touch with students from other disciplines. And indeed, that helped on that front. Later, when Faheem started working part-time at CMU-Q, and TAMUQ, as well as at VCUarts Qatar, I realized the benefits of studying in EC wasn’t purely academic – it was experiential and holistic as well.

Did your acceptance of Faheem’s decision influence your understanding of design itself?

Mohammad Shahjahan Khan: There’s no doubt about that. It was a learning process, but from son to father. I had always viewed design as a single broad field that didn’t dive deep into any one topic. I had no idea that there were so many specializations in art and design. Nor did I know that there were so many applications of design in daily life. When I saw the products that Faheem made during his undergraduate and graduate studies, the engineer in me was amazed at the practicality of those designs. That was revelation number one.

Revelation number two was regarding employment. It was clear he was working hard. And getting good grades. But I confess I had my moments of doubts for quite some time – what if, after all this, he didn’t find a job? He proved us wrong. Even before he graduated with a BFA in graphic design, he had secured a job at Qatar Financial Centre Regulatory Authority (QFCRA). The job gave him the professional experience and financial stability he needed – he was able to pay off all his student loans. Right now, he’s working part-time at QFCRA, as well as with TAMUQ and VCUarts Qatar. Plus, since I retired a few years ago, he is contributing to the family’s finances. A few weeks back he surprised us with a gift – a new car – which he’d bought with the money he saved. And he did this while juggling his studies for an MFA in Design, and his part-time jobs.

Farzana Ahmed: Another eye-opener was how competitive and demanding the study of design is. I had always assumed that only students who studied engineering and medicine burned the midnight oil. I was surprised to see the amount of work that Faheem had to put in to get good grades. I remember how he’d spend days at VCUarts Qatar, with hardly any sleep. He wouldn’t come home, often sleeping in the university or his car.  He was working part time, juggling a demanding program, and participating in hackathons and bootcamps across EC. He didn’t have the time to eat from the restaurants within EC. So, I’d cook food, and my husband and I would drive down to his university from Al Wakra where we lived, just to make sure he ate.

You’ve been in Doha since 1979 and experienced its expansion. What do you feel about Faheem being part of the country’s creative economy?

Mohammad Shahjahan Khan: The Doha I landed in, in the November of 1979, is perhaps an era away from the Doha that you see today. Yet even back then it was obvious that the country had a soft corner for creativity; thirty years ago, Doha hosted art and design events and exhibitions, though at a smaller scale. That soft-corner has continued – you see that in the way public art and design are flourishing. There are gallery and exhibition openings almost every week.

As an engineer, I was always on the move, and nowadays I’ve noticed that you can’t drive a mile without an art installation or a striking building or a beautifully landscaped walkway or public space, catching your eye. And it’s not just outdoors – Qatar’s expansion in architecture, telecommunications, health, and education creates opportunities for designers. There isn’t a single sector that doesn’t employ a designer. It’s the right ambiance for people like Faheem to not just earn a living, but also experiment and explore new creative avenues.

Farzana Ahmed: I do, and it’s this: allowing children to choose unconventional pathways doesn’t mean they automatically lose their innate skills in other areas. Rather, it might boost those other traits. I speak from experience. Prior to joining VCUarts Qatar, I’ve seen Faheem help my second son in TAMUQ complete his semester projects. That hasn’t changed. If at all, his hands-on exposure in various programs at VCUarts Qatar has only enabled him to help Mouhyemen, who is currently studying for his PhD at Georgia Tech, more.

The same applies to his extra-curricular activities. In school, in addition to art and design, he was a regular at local competitions, participating in accelerator programs at QSTP. In fact, he started one of Qatar’s first robotic institutes with his brother in August 2013, when he was in his 10th grade. Studying design didn’t stop him from participating in such events; on the contrary, it only sharpened the performance and outcomes of such participation at the university level.

Mohammad Shahjahan Khan: What I’ve realized is that if you let your children follow their hearts, they’ll find their feet with confidence. Some children might take longer than the others; some might take a path you’re not familiar with. But if your child is not afraid, why should you, the parent, be? Eventually, they’ll get to that place that fulfils them, both emotionally and professionally.

And for any parent, I guess that’s what matters the most – to see their child content and fulfilled. 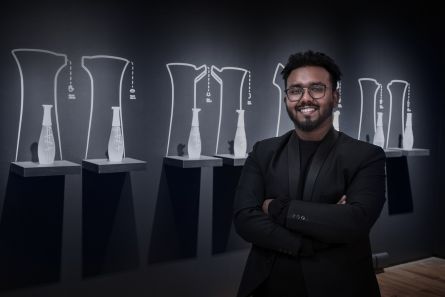 Faheem Khan (right), with his parents, when they visited his thesis presentation at the BFA MFA 2022 exhibition.

Faheem's father, Mohammad Shahjhan Khan, (pictured here in a photoshoot for Faheem's final thesis) says he gained a deeper understanding and appreciation of design, through his son.

Faheem Khan (left), with his parents, when they visited his thesis presentation at the BFA MFA 2022 exhibition.