Political and social identity in the Arab world generally, and in the gulf region specifically, has drastically changed due to globalization and different types of colonization. In this video, alumna Nour Elbasuni talks about how it is reflected in her painting "Guardians", which is currently on display at our Library.

Nour Elbasuni is a recent Painting + Printmaking alumna of VCUarts Qatar. In this video, Nour reflects on her painting titled, "Guardians" and her decision to depict Arab countries as women.

In the painting, their facial features are an approximation of the faces in each region. Together the women represent the similarities between the cultures and how they transcend the artificial borders and conflicts that separate Middle Eastern countries.

"Unity," says Nour, "is the main intention behind the painting, and bringing cultures together, and blurring the lines between the countries or whatever people have built that make them think that they are better than other countries, whether it is wealth or history, wars that they have won, whatever it is. We're all in the same blender. That is what I always say." 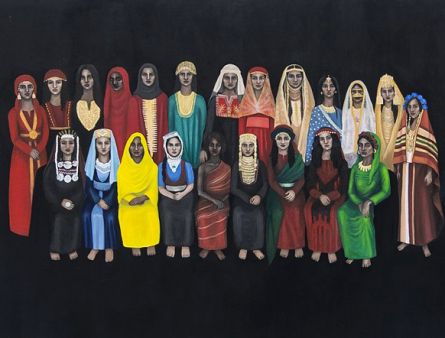