VCUQatar and the Qatar Racing and Equestrian Club (QREC) announced the VCUQatar student winners for the design of the two trophies - the Qatar Prix de l Arc de Triomphe and the Qatar Arabian World Cup – two of the most prestigious events organized by the QREC in France.

The winner for the designs of both the Qatar Prix de l’ Arc de Triomphe and the Qatar Arabian World Cup trophies was Abdulla Al Gosaibi in first place. For the Qatar Prix de l’ Arc de Triomphe trophy design he used the Arc De Triomphe of France and the Souq Waqif of Qatar as the two influential and prominent landmarks from both cultures and created a fusion between the two eminent designs. He also drew inspiration from French Neoclassical designs and patterns and applied them to other parts of the trophy. For the Qatar Arabian World Cup trophy, Abdulla wanted to design a trophy with strong cultural elements from the Qatari culture to give the trophy a strong cultural and unique visual identity. So he explored the old architecture of Qatar for inspiration and also applied Arabesque patterns on the trophy to add more splendor and energy to the form to reflect the beauty and liveliness of horseracing. There are nine triangles around the globe on the trophy taken from the Qatari flag to signify Qatar as the host and the globe as a universal attribute as the race is an international contest.

Sami Al Boenain said the designs were not easy to judge. “All the trophy designs were beautiful, but we chose the ones that incorporated all the elements we were looking for when we made our choice,” he said. He went on to congratulate all the students who took the elective, adding that QREC would make replicas of both trophies for VCUQatar’s collection. Besides providing certificates of recognition to the winners, QREC is also awarding a full scholarship to VCUQatar for designing these trophies. The winners will also be promoted in QREC’s promotional material.

“I would like to thank QREC for offering our students the opportunity to design these prestigious trophies this year as well,” said VCUQatar Dean Allyson Vanstone. “VCUQatar continues to provide outstanding opportunities for young designers to make significant contributions to the design industry and initiatives such as these create a foundation for inspiring and preparing young people to enter and sustain design professions. These students represent the design leadership of tomorrow,” she added.

Equestrian Trophy Design was introduced as a special elective for Spring 2010 at VCUQatar and in the intensive five-week studio course students learned to develop trophy designs for the 2010 Qatar Prix de l’Arc de Triomphe and The Qatar Arabian World Cup, in collaboration with the Qatar Racing and Equestrian Club. “The challenge was quite interesting, as we decided to study the visual culture from Qatar and France,” said Assistant Professor at VCUQatar Muqeem Khan. “Our plan was to grasp the vernacular architectural elements form Qatar and compliment them with French architectural and artistic motives. I designed the instruction for this class so we could develop creative responses to the ways in which 3D forms represent context and relevance. During this five week journey from research to design finalization, we developed and recalled ‘formal’ vocabulary of forms. A cyclical process of evaluation constantly emphasized the transformation of literal or pictorial representations to concrete and to abstraction or expression. Our product is supposed to be a museum quality product, which will have a special attachment for the winners, venues and events. During the process we explored preciousness, ornamentation, context, relevance, and transformation of multiple forms. We also wanted to keep the individual visual integrity of each element and emphasis was given to the unique cultural forms from both countries,” he said.

“I am very happy that these interior and graphic design students, who are from the freshman through junior years, grasped my instructions and worked really hard towards the goal. They cultivated and nurtured their concepts with complete responsibility. The results speak for themselves,” he added.

The program of the weekend of Qatar Prix de l’Arc de Triomphe includes 15 thoroughbred races of which seven are Group 1 races and one is a Group 1 race for Pure Arab Horses - The Qatar Arabian World Cup. Held in October 2008, the first edition of the Qatar Arabian World Cup was the first race for purebred Arabians to be run in Longchamp racecourse the same day of the Qatar Prix de l’Arc de Triomphe. With prize money of 450,000 Euros, this race is considered as the World Championship for purebred Arabian horses.

VCUQatar students have been called upon on several occasions to design for the Qatari community. VCUQatar graduate Mary Anne Skill designed the Qatar Foundation Award for Courage trophy for Oryx Quest 2005 and in 2008 VCUQatar fashion design students designed uniforms for the Qatar Symphony Orchestra. In August 2007, VCUQatar’s Center for Research in Design was commissioned by the Doha 2016 Bid Committee to design the logo for the Doha 2016 Olympic and Paralympic Bid and the logo designed by Fatma Al Mogunni and Lejla Niksic was accepted for official use. VCUQatar freshman students also designed the trophies for both the races - the Qatar Prix de l’ Arc de Triomphe and the Qatar Arabian World Cup - last year. 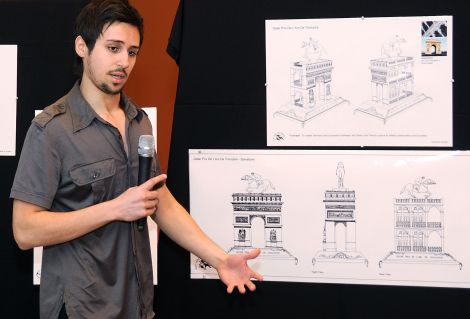 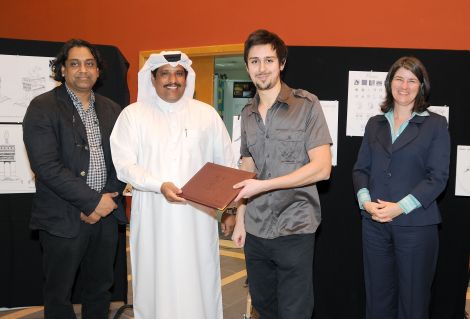 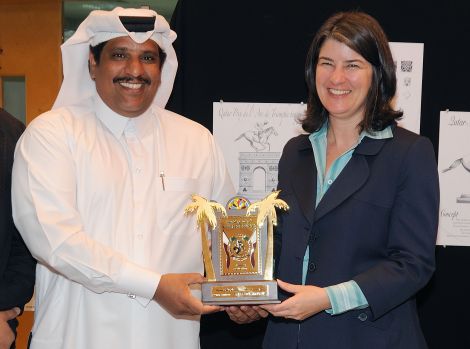 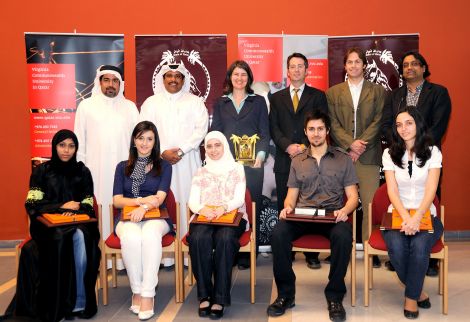