The 13th Commencement brings the number of VCUQatar alumni to 473.

“At VCUQatar we encouraged you to dream and offered you exceptional programs, dedicated faculty, dynamic peers and outstanding opportunities to help you pursue those dreams,” said VCUQatar Dean Allyson Vanstone in her message to the graduating students. “You are educated citizens who will enrich the lives of those you touch. As critical artists, designers and scholars, you will build bridges of understanding between cultures through your work. There are significant challenges in our world that need your attention and passion. You have the knowledge, skills and abilities to approach any challenge with creative experimentation, collaboration and commitment.

“You have been exceptional representatives of VCU in Qatar, Richmond and throughout the world. I have no doubt that you will continue to serve as worthy ambassadors for the university by building upon our reputation for excellence and becoming leaders in your chosen field both at home and abroad,” she added.

Virginia Commonwealth University President Dr. Michael Rao addressed the graduating students during the ceremony. “As members of VCUQatar’s graduating class, you have distinguished yourself in many ways, and we are very proud of you and your achievements. You’re more than the next generation of leaders in our cities. You are the new embodiment of that boldest idea that human potential is still the greatest resource in our world.

“You are also continuing a great legacy at Virginia Commonwealth University. I’ll be back in Richmond in a few days and I will take with me your passion, creativity, and commitment to sharing your gifts with a world that’s desperate for innovation—including innovation through visual imagery. I will bring back from one capital city to another, from one part of VCU to another, the never-ending assurance that our graduates—no matter where they live, or where they go—are going to use their talents and gifts to change the world. And from Doha to Richmond, it will be beautiful,” said President Rao.

Emirati Animation Director and Chairman of Lammtara Art Production Mohammed Saeed Harib delivered the commencement address to the 62 graduates during the afternoon ceremonies. He talked about his journey as a male Emirati making his way in the world of design – how he was the only male Emirati student in arts of the 100 Emiratis studying in the US. He elaborated on the numerous obstacles he faced for over three years before he was able to get funding for his famous animated TV series Freej and how that was just the beginning of his journey which now includes folklore, wedding production, music production, photography, films, events, and much more. He told the students Freej was based on his idea to create a superhero, as the region’s always looking for them, so he created a superhero for Freej - his grandmother Umm Al Saeed. He told the students Qatar needed super heroes like them to contribute with their creativity. “When I was a child I watched movies like the Lion King and when I started working on Freej in 2006, I worked with the director of Lion King, so dream big, don’t let people tell you, you can’t. Your country needs you, Qatar’s hosting the World Cup, it needs you contribution, the region needs you, Dubai’s hosting the World Expo and I hope many of you will make great contributions to both.”

Freej, which means neighborhood in the Emirati dialect, was voted by viewers as the number one show of 2006, 2007 and 2008. In 2007, the first season also received the Special Country Award at the Hamburg Animation Awards and Harib won the Emerging UAE Talent Award at the Dubai International Film Festival. Harib also won the title of Young CEO of the Year in 2008 from CEO Middle East magazine and has been recognized as one of the World’s Most Influential Arabs from 2008 to 2012 by Arabian Business magazine. Harib studied General Arts and Animation at Northeastern University in Boston, before pursuing his dream to create the Middle East’s pioneering 3D animated series. He recently served as a creative consultant for “Cruel Summer,” a project that featured Kanye West and Hayat Alfahad and was launched in the Cannes Film Festival. He is currently working on the animated feature “The Prophet” with Roger Allers, the director of “The Lion King,” and actress Salma Hayek who is acting as a producer on the project alongside The Doha Film Institute.

The ceremony marks the culmination of years of hard work and perseverance on the part of the BFA and MFA graduates. They have spent their time at VCUQatar fulfilling an intensive and rigorous curriculum, one designed to foster not just first-rate artists and designers but well-rounded individuals prepared for the challenges and responsibilities of a highly complex professional world. Students, their families, friends, faculty and staff came together to celebrate VCUQatar graduates’ accomplishments and rejoice in their venture into the professional field as they take their expertise and creative capacities to every area of art and design.

Painting and printmaking graduate and Valedictorian Diego Mendoza Sanchez in his address to the graduates narrated their various experiences on their journey as the class of 2014 – especially the all-nighters they pulled that involved the corridor chats about projects, fast-food deliveries, coffee/karak sessions, power naps and waking each other up to finish projects among several other memories. “We’ve been stretched and transformed in every possible way. It would have been a much more difficult path had it not been for the guidance of the faculty and staff who prepared us,” said Sanchez. He went on to thank all the families of the graduating class, the faculty, staff and the graduating students for being a nurturing and dynamic group of people. “I wish you all the very best. Buckle up and enjoy the ride!” he concluded.

Following the Valedictorian’s speech, Dr. Beverly Warren, provost and vice president for Academic Affairs at VCU, presented the candidates of the Master of Fine Arts degree in Design Studies their diplomas; Dean Vanstone presented the candidates for the Bachelor of Fine Arts degree their diplomas and President Rao conferred upon them their MFA and BFA degrees. Dr. Warren also recognized the honors graduates.

The other luminaries present for the ceremony included Dr. David Prior, executive vice president and provost, Hamad bin Khalifa University; Joseph Seipel, dean of the School of the Arts, VCU Richmond; Rector William M. Ginther from the Board of Visitors; and Dr. Jelena Trkulja, director of education, Qatar Museums Authority and Joint Advisory Board Member, among others.

The 62 new VCUQatar graduates will join the band of 411 alumni who are pursuing successful careers within the government, nonprofit and private industries in Qatar and around the world. Many VCUQatar graduates have gone on to establish their own businesses, thereby contributing to the development of the small and medium enterprise culture in Qatar.

Class of 2014 at Commencement

Class of 2014 at the Commencement Ceremony 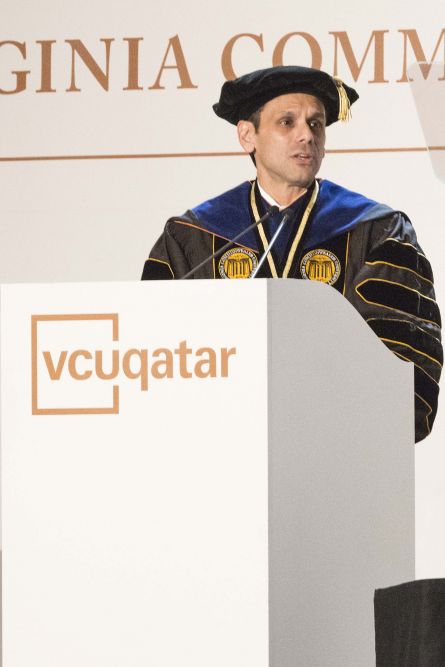 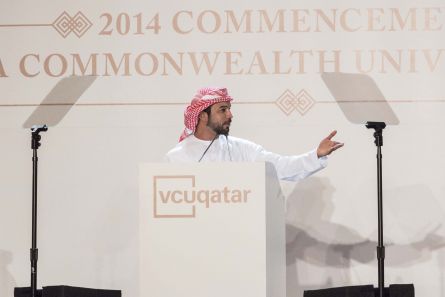 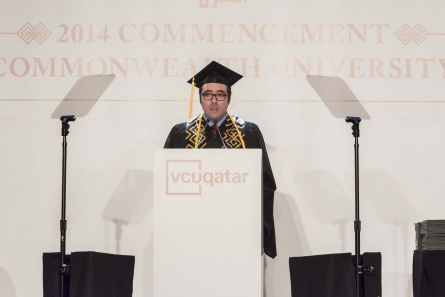