As part of the Crossing Boundaries Lecture Series, Virginia Commonwealth University in Qatar presents a lecture by renowned interaction designer Crispin Jones entitled Complicated Pleasures on Wednesday, 15 February, 2012 at 6:00 pm at the atrium at VCUQatar.

In his lecture Jones will talk about the projects he has worked on over the past decade, focusing particularly on how he moved from making one-off experimental works into producing his own product ranges.

Crispin Jones is a London-based designer who works at the intersection of Art and Design – broadly Critical Design. His work uses the language and tools of product design to articulate a critical perspective.

Jones graduated from the Royal College of Art in 2000 with an MA in Computer Related Design. After graduating he worked for a number of companies including Casio Research, Philips Design and IDEO London. He has also worked independently and in partnership (as one half of Robson & Jones) on interactive projects for a number of high profile clients including The BBC, Tate Modern, The V&A and The Science Museum. He has taught at several design schools both in the UK and internationally, including as visiting lecturer, at The Royal College of Art (UK), Central St Martins School (UK), Interaction Design Institute of Ivrea (Italy) and Schooling Pad (Japan).

Alongside the commercial work, he has produced more experimental works - these projects have been exhibited internationally including as a prize winner at the Prix Ars Electronica (2002); as Grand Prize winner at Japan Media Arts Festival in Tokyo (2003); at Digital Arts Festival Tokyo (2003); at Salone Del Mobile, Milan (2005 and 2007); at 100% Design Tokyo (2006); as part of “On Time” at the Museum for Design in Zurich (2007); “Design and the Elastic Mind” at The Museum of Modern Art (MoMA) in New York (2008) and “Talk To Me” also at MoMA (2011). In 2011 Tengu was added to the permanent collection of MoMA in New York.

Jones currently designs and produces his own range of products under the Tengu and Mr Jones Watches brands. He works from a studio at the Oxo Tower on the river Thames on London’s Southbank.

VCUQatar’s Crossing Boundaries Lecture Series reflects the cross-disciplinary nature of the featured speakers who are representatives of excellence in design thinking. Each speaker will present a paradigm of design thinking that seeks to evolve solutions to problems in innovative, creative ways.

‘Complicated Pleasures’ is the fourth in the series of five lectures and will be presented on 15 February at 6:00 pm at the atrium at VCUQatar. The lecture is open to the public. 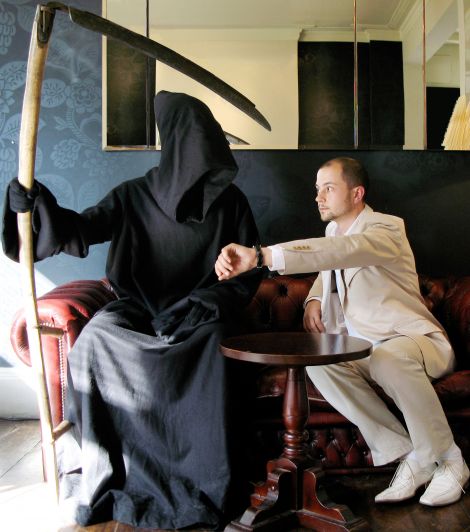