The Gallery at Virginia Commonwealth University in Qatar is pleased to present ‘The Depth of Hope,’ by acclaimed Egyptian Sudanese artist Fathi Hassan and a Crossing Boundaries lecture entitled ‘Signs, Traces & Calligraphy’ by Rose Issa, London-based curator, writer and producer.

The opening reception for 'The Depth of Hope' exhibition will be held on Wednesday, 15 January at 7:00 pm at the Gallery at VCUQatar and is preceded by the lecture ‘Signs, Traces & Calligraphy’ at 6:00 pm at the atrium at VCUQatar. Both events are open to the public.

In his drawings, paintings, sculptures and installations, Fathi Hassan experiments with the written and spoken word, exploring the theme of ancient languages erased by colonial domination. With invented, Kufic-inspired scripts, he plays with the symbols, textures and calligraphy of his Nubian heritage to explore the space between graphic symbolism and literal meaning in vibrant colors and collage.

Fathi Hassan was born was born in Cairo in 1957 to Sudanese and Egyptian parents. Since graduating in 1984, he has lived in Le Marche, Italy, and currently works between Italy and Great Britain.

As part of VCUQatar’s Crossing Boundaries Lecture Series, ‘Signs, Traces and Calligraphy’ focuses on the first international impact of contemporary Arab and Iranian artists in the West that started with "Signs, Traces and Calligraphy", an approach that was not only new in the Western world - because they referred to their own cultural background - but encouraged artists to impose the own original signature and aesthetics in the world art scene.

Rose Issa is a curator, writer and producer who has championed visual art and film from the Arab world and Iran for nearly 30 years. She has lived in Iran, Lebanon, France and, for the last 25 years, London, where from her project space in Great Portland Street she showcases upcoming and established artists, as well as producing exhibitions and publications with public and private institutions worldwide. Through curating numerous exhibitions and film festivals, she introduced Western audiences to many artists who have since become stars of the international scene, including: Chant Avedissian, Ayman Baalbaki, Shadi Ghadirian, Monir Farmanfarmaian, Bahman Ghobadi, Hassan Hajjaj, Farhad Moshiri, Abbas Kiarostami, Rashid Koraichi and Nja Mahdaoui among many more.

As well as holding exhibitions at her own project space in London, Rose Issa collaborates as a co-curator with private and public institutions such as the Beirut Exhibition Center (2010-11); the Bluecoat Arts Centre, Liverpool (2010); Tate Britain, London (2008); the European Parliament, Brussels (2008); the State Museum of Oriental Art, Moscow (2007); the Hermitage Museum, St Petersburg (2007); ING Bank, Geneva (2007); the Victoria & Albert Museum, London (2006); the Haus der Kulturen der Welt (HKW), Berlin (2004); The CCCB (Contemporary Cultural Centre), Barcelona (2003); the IFA - Institut fur Auslandsbezeihungen (2002-3), Stuttgart; the Tropenmuseum, Amsterdam (1996-1997); the Barbican Art Centre, London (2001, 1995); and Leighton House Museum, London (ongoing, since 1992). She also advises and lends works to public and private institutions, including the CAB Art Centre, Brussels (2013); the Boghossian Foundation, Brussels (2012); the Queensland Art Museum, Brisbane, Australia (2009); Paul Klee Museum, Bern (2009); Belvedere Museum, Vienna (2009); The British Museum; the Imperial War Museum; The Museum of Mankind; the Victoria & Albert Museum; The Written Art Foundation, Wiesbaden; The National Museums of Scotland; the Los Angeles County Museum of Art; The Smithsonian Institution (Sackler/Freer Gallery and National Museum of African Arts); the World Bank, Washington DC; and The National Gallery of Jordan. Rose Issa was a Jury member for the National Pavillions at the 50th Venice Biennale (2003) and sat on the Jury for the Arab British Centre (2013) and MOPCAP (the Magic of Persia, 2013).

‘The Depth of Hope’ runs at the Gallery at VCUQatar from 15 January to 27 February 2014, with an opening reception on 15 January at 7:00 pm. The opening reception is preceded by VCUQatar’s Crossing Boundaries lecture entitled ‘Signs, Traces & Calligraphy’ by curator Rose Issa, and is held at the atrium at 6:00pm. The events are open to the public. For more information, please visit www.qatar.vcu.edu or email VCUQatar Exhibitions and Speaker Curator Caitlin Doherty at cmdoherty@vcu.edu. 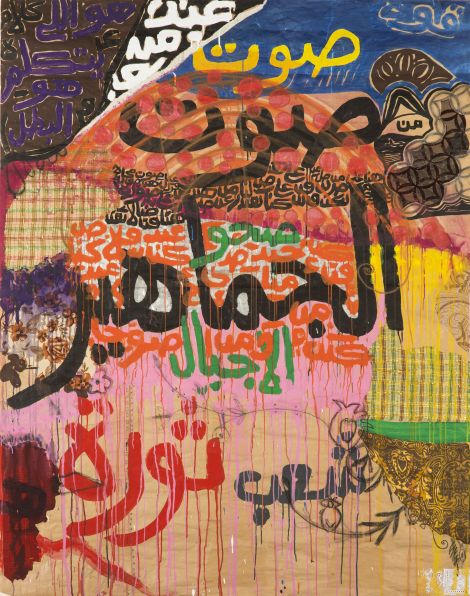