The drawings were previously published in American Artist: Drawing edition, (Summer 2009) in an article entitled “Fleshing Out Leonardo’s Grotesque Heads” by Bob Bahr.

Jesse Payne developed a fascination with Leonardo da Vinci’s grotesque heads, a series of caricature drawings of disfigured people, and decided to render these busts but with a slight difference from the Renaissance master’s. “In most cases Leonardo’s drawings were small, no more than two inches in height, but my drawings are all rendered life size, that is, the heads in my drawings are the same size as ours,” says Payne who began working on the project in 2008 using da Vinci’s images as a starting point to complete his final images. He completed the project in 2010.

No one knows what da Vinci’s intentions were for the grotesque heads or whether they were drawn from life, from imagination, or both. Nevertheless, these pieces were immediately popular and often copied, even while da Vinci was still alive. Some art historians speculate that it was da Vinci’s intention that developing artists copy his grotesque heads and at some point in his life, the master did at least 100 of them.

Payne’s interpretations expand beyond da Vinci’s sketches. Da Vinci’s grotesque heads are mostly done in pen and brown ink while Payne’s drawings were made using various graphite pencils, materials that more easily allow variations in value and erasure. Payne however retained da Vinci’s basic rules for the heads’ presentation - the people are seen from the top of the head to the middle of the sternum or a line just below the shoulder, and no backgrounds are suggested.

The people depicted in da Vinci’s sketches are almost never facing the viewer, a point that Payne considers important. It fits with some opinions that da Vinci secretly observed the models, instead of engaging with them face-to-face. Payne also believes that viewers would have a much tougher time approaching the drawings if the figures were looking straight ahead, suggesting eye contact. He preserved this aspect of da Vinci’s drawings, in part because he wanted viewers to feel comfortable taking a close look at his drawings. “I made my drawings life-size to help achieve a life-like quality to the work and to engage the viewer more so in terms of interacting with the work. Furthermore, I took it upon myself to embellish these heads with various skin conditions to make them more grotesque, pushing the level of deformities, the blisters and psoriasis to the point that they might seem transferable, to the point where you don’t want the subject to turn his or head and look at you or breathe on you. But I want people to come closer to see the detail I put in there.”

“Leonardo’s heads are some of the most copied drawings of all time, so perhaps in some cases I am doing copies of copies,” says Payne whose elaborately detailed drawings clearly suggest he’s doing a bit more than copying. Where da Vinci suggested bad skin, Payne depicted a particular dermatological condition in great detail. While da Vinci showed the basics of a garment, Payne illustrated the texture of the fabric. “Leonardo’s self-portrait - shown next to my rendition - is believed to be his only surviving self-portrait and perhaps the only one he ever made. It is very faint and I strived to keep that quality in my final drawing,” says Payne. This attention to detail is partly a result of Payne’s apprenticeship, while working on the project, to Odd Nerdrum, the noted Norwegian figurative artist who he considers the greatest technical painter of our time. “I came back from my apprenticeship a much better artist and improved all the grotesque heads I had already done,” he recollects adding he spent five more hours on a section of a shirt in one of the drawings.

Jesse Payne graduated with an MFA in Painting from Northern Illinois University in 2003. Previous to that, he received his BFA in Painting/Drawing in 2001 from Indiana State University. Payne has presented papers on the topics of drawing, design thinking, idea development, creativity, curriculum development and assessment at national and international art and design conferences over the past three years. He’s been assistant professor in the Art & Design Foundation Department at VCUQatar since August 2010.

Payne is also vice president for Development for the national organization FATE (Foundations in Art: Theory and Education) which is dedicated to the promotion of excellence in the development and teaching of college-level foundation courses in both studio and art history. 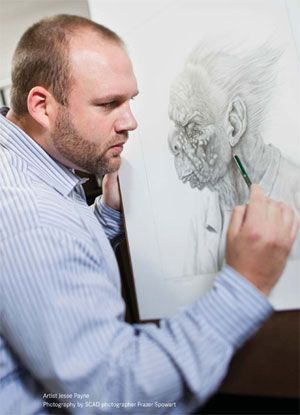 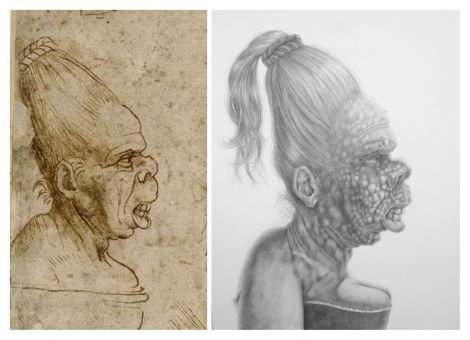 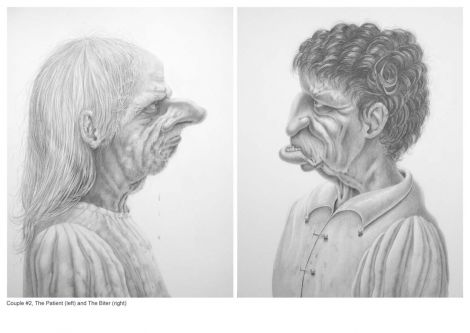 Jesse Payne pairs his Grotesque Heads The Patient (left) and The Biter (right) on a page to reflect how da Vinci or the copyists, from as far back as 1506, could have placed them 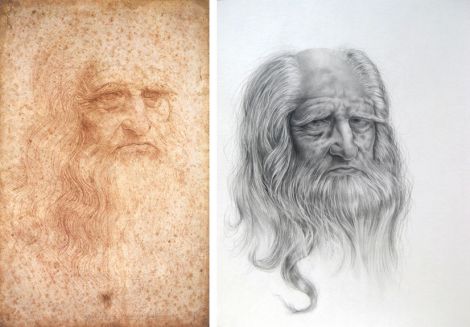