This exhibition brings together the works from Basma Alsharif, Khalid al Gharaballi and Setareh Shahbazi.

Comfort zones are forms of concessions which we allow ourselves in times of global political uproar, violent conflicts, economic instability and in an era of increasing numbers of natural disasters. However, to be comfortable is mostly a privilege that comes with the right amount of wealth and access to education and is often linked to other determinant factors such as race, gender or nationality. The exhibition curated by Daniel Berndt reflects on comfort on different levels taking the notion of home and privacy as a point of departure. Bringing together the works of three international artists from different artistic backgrounds it addresses the comfort zone quite literally, as an allegory for the nation state and the establishment of borders or a form of escapism, as an (imaginary) place to which we want to retreat from the often overwhelming reality of our everyday life.

A panel discussion moderated by Dr. Bahaa Abudaya, Curator of Contemporary Art at Doha Fire Station Museum with artists Al Gharaballi and Shahbazi and curator Berndt will take place at the VCUarts Atrium at 6pm before the opening reception at the Gallery at 7pm.

Regular opening hours: Saturday to Thursday - From 9am to 5pm / Friday - Closed

More information about the artists and curator:

Basma Alsharif is an artist/filmmaker who was born in Kuwait of Palestinian origin, and raised between France, the US and the Gaza Strip. She works between cinema and installation, centering on the human condition in relation to shifting geopolitical landscapes and natural environments.

Khalid al Gharaballi is a Kuwaiti artist who is based in Kuwait City. After first establishing an artistic collaboration with fellow Kuwaiti artist and musician Fatima Al Qadiri based in New York City, he relocated to Kuwait City in 2012 to help co-found the artist collective GCC. His solo work centers on documenting the urban and domestic landscapes of his native Kuwait.

The exhibition has been curated by Daniel Berndt, whose writing has appeared in Ibraaz, Springerin, Aperture and Frieze, amongst other publications. His book, “Wiederholung als Widerstand?” (Repetition as Resistance?), on the artistic (re-)contextualization of historical photographs in relation to the history of Palestine (analyzing works by Akram Zaatari, Lamia Joreige, Walid Raad, Emily Jacir and Yasmine Eid-Sabbagh), was published in 2018 by Transcript.

The Gallery at VCUarts Qatar 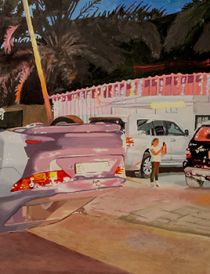