UAE-based writer and art collector Sultan Sooud Al Qassemi discussed the political undertones of iconic artworks of the 20th century in the Arab world for the first Crossing Boundaries Lecture of the 2016-2017 year.

From the Baathist regimes of Syria and Iraq to Egypt’s pan-Arabism under Gamal Abdel Nasser, paintings and sculptures in addition to film and performance have been employed by various governments as a tool of soft power to propagate their policies to the public not only in their respective states but throughout the region and beyond. Despite this government patronage of the arts, many artists have chosen to challenge their authorities through their art practices. This talk is an attempt to shed light on an often neglected dimension in the modern history of the Arab world. 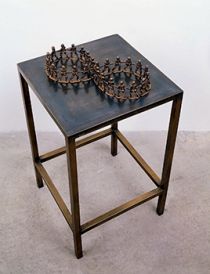